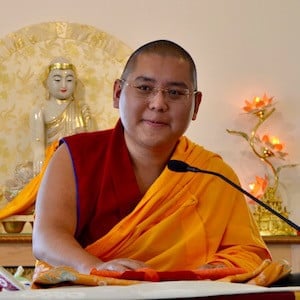 His Eminence the 7th Ling Rinpoche, reincarnation of His Holiness the Dalai Lama’s Senior Tutor, taught two sessions on a short Tibetan text, “A Song of the Four Mindfulnesses” by the 7th Dalai Lama and gave a public talk at North Idaho College in Coeur d’Alene, Idaho. See photos of his visit.

Ling Rinpoche’s predecessor, H. E. the 6th Kyabje Yongzin Ling Rinpoche, was the 14th Dalai Lama’s root guru. He was also the preceptor for Ven. Thubten Chodron’s novice ordination in 1977. “Thubten” is his lineage name, which most of the Abbey monastics also carry. Watch his Abbey teachings here.

The 7th Ling Rinpoche entered Drepung Monastic University’s Loseling College at the age of five, commenced monastic studies at age 10,  and completed his geshe degree in 2016. Rinpoche has taught throughout Asia, Europe, North America, and Israel. He has also been involved in many important Buddhist events, including requesting His Holiness the Dalai Lama’s historic series of Jangchup Lamrim teachings in South India and participating in Mind and Life Institute dialogues between His Holiness and scientists.

Ling Rinpoche has been teaching in India, Asia, Europe, and North America since he was young, and he is a compelling teacher. He is interested in Western culture, and his first-time visit to the Inland Northwest offers a chance for him to learn more about American life.