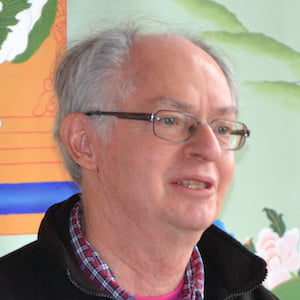 A student of Geshe Lhundub Sopa, Roger R. Jackson has studied Tibetan Buddhism for over 40 years. His passion is Mahamudra—literally, the Great Seal—which he shared with Sravasti Abbey for two jam-packed days during our 2016 winter retreat.

Roger’s interests include Indian and Tibetan Buddhist philosophy, meditation, and ritual; Buddhist religious poetry; religion and society in Sri Lanka; the study of mysticism; and contemporary Buddhist thought. He is author of Is Enlightenment Possible? (1993) and Tantric Treasures (2004), co-author of The Wheel of Time: Kalachakra in Context (1985), editor of The Crystal Mirror of Philosophical Systems(2009), co-editor of Tibetan Literature: Studies in Genre (1996), Buddhist Theology (1999), and Mahamudra and the Bka’brgyud Tradition (2011), and has published many articles and reviews.