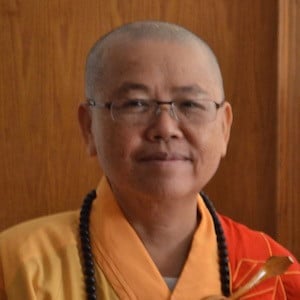 Venerable Mingjia Shih has served as Acharya for many of the ordinations at the Abbey. With each ordination visit, she shares her wisdom born from many years of practice and leadership in the Dharma.

Ven. Mingjia was born in Taiwan in 1951. She graduated from Kaohsiung Teacher’s College with a BA in Chinese Literature in 1973. Wishing to be of benefit to all beings, she ordained as a nun at Luminary Temple in 1977 and received full ordination in 1979.

While living in the United States, she established the American Evergreen Buddhist Association in Kirkland, WA in 1987. She earned an MBA from City University in 1992, after which she returned to Luminary Temple, Taiwan, assuming the position of abbess in 1995. In 1999, renowned meditation teacher S. N. Goenka assigned her to be a vipassana assistant teacher, after which conducting vipassana courses became her primary Dharma activity.

Ven. Mingjia is currently the abbess of Manjushri Vihara in the south of Taiwan, a position she has held since 2003. A recipient of the 2012 Outstanding Women in Buddhism Award from the International Women’s Meditation Center Foundation in Thailand, she is presently engaged with building a vipassana meditation center in Taiwan.

View photos of one of the ordinations with Venerable Mingjia.