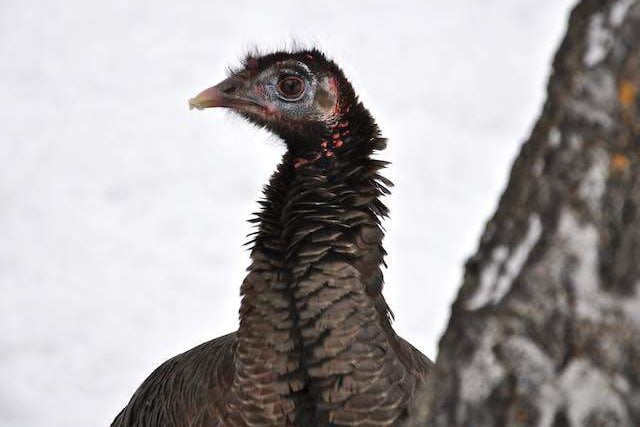 Winter retreat offers time and conditions for deep reflection. On a walk down Country Lane, Ven. Chonyi ‘s meditation on the four truths known by the aryas (four noble truths) comes vividly to life in an everyday tragedy.

Mahogany feathers iridescent in the sun, vivid against a bank of snow,
the hawk is quick but unhurried as he plucks, one by one,
the tiny fluffy feathers from the turkey carcass stretched out at his feet.

The fineness of the feather fluff shows the hawk is near his goal:
another patch of flesh in which to sink his beak and feast to sooth his craving.
So intent he is on savaging turkey meat that I can watch from a few feet away,
completely unnoticed.

The turkey’s neck is long, her eyes shuttered,
and a gaping patch of pink glistens in her side showing where her killer has already dined.
This is not his first meal today.

Regal, really, in his terrible task.
Somewhere at some time this hawk has surely
ordered the slaughter of soldiers, women, and children and watched
—the proud conqueror—
with this same concentration,
blind to the horror of his hapless victims,
spurred only by the cold fire of his craving.

Did the turkey know what hit her?
Did she die in terror?
Or instantly from the hawk’s swift strike from above?

I chant and rain the light of Medicine Buddha on the whole grisly scene.
“May she be born human, return to the Abbey, ordain as a nun.”
But this is samsara.
My small prayer may help, but only her karma can make it so.
How long before her chance to meet the Dharma can actually arise?

This nun, in fact, driven by craving, has devoured so much—

“Hungry for the good things, baby,
Hungry through and through,.”
Craving for pleasure,
craving for love,
craving control,
craving to be free of all pain.

This hawk has been my lover, this turkey was once my child;
they both have been my mother,
craving for pleasure, shunning pain.

In the wintry silence,
something tender arises in me.

I know this hawk. I know this turkey.
They are just like me and I am just like them,
except—
for this brief moment—
I have one powerful advantage.

I take refuge until I am awakened in the Buddha, Dharma, and Sangha.

Leaving the everyday tragedy to unfold in the snow, this nun turns uphill.
Steadily, step by step, I climb towards the Abbey.
The prayer on my lips is fervent and firm.

May we be free.
I will cause us to be free.
Guru Buddha, please inspire me to be able to do so.

*The four attributes of true origins of dukhkha (unsatisfactory conditions), the second of the four truths known by the areas (often translated as the four noble truths), quoted from Buddhism: One Teacher, Many Traditions.