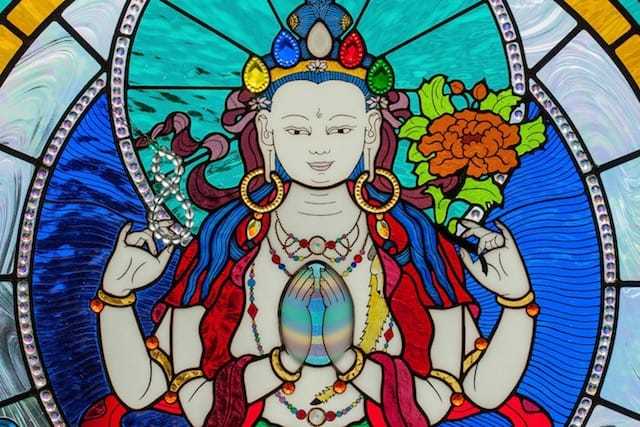 In September, glass artist Beverly Brecht  offered a new stained-glass window for Chenrezig Hall—a beautiful rendition of Four-Armed Chenrezig for the Kwan Yin Room. Here, we re-post Bev’s reflections on her creative process. See the gallery of photos of the new window (below) and Tanya’s Bodhisattva’s Breakfast Corner talk on how these windows came to be.

Increasing My Practice of Generosity

I wasn’t even really aware of when my practice of generosity began.  I think I had always had a sort of generalized, half-baked practice of giving even before I became a student of Buddhism.  If I could help someone I would.  If I had something someone else admired I might give it to them…even a stranger I did not know.  I always felt good when I did this. But I do know when the practice I have now started. It was in 2008 at Lehigh University.

I was attending a teaching by His Holiness on the Great Treatise of the Stages of the Path. One day during lunch break I was sitting outside with a group of lay people and monastics from Sravasti Abbey in Washington state. I didn’t know anyone in this group except for my Dharma buddy Tanya, who knew all of these people.

The Abbess, Venerable Thubten Chodron, was talking about a construction project underway at the Abbey—a dormitory for the nuns.   She casually mentioned that she would like to have a stained glass window in the building.  My friend Tanya just turned to me and smiled.  She has known me for a long time and knew that as a professional stained glass artist I had the skill to create this window.  So I spoke up and said,  “I can make you a window”.  I don’t exactly remember what anyone said just then but eventually I submitted a portfolio of images of my glass work to Venerable Thubten Tarpa at the Abbey.  I got the job.

This window was to depict the first Buddhist nun, Mahaprajapati Gotami. The problem was that there were few images of this woman that we knew about.  Venerable Chodron found a Tibetan artist/thangka painter who agreed to create a painting I could use as a model. This was immensely helpful as I am not a trained Tibetan artist who would be familiar with the Tibetan grid system used for creating correct proportion. He produced the painting and I created the window.

The Gotami window was installed in Gotami House in 2009. I felt good giving this window to the Abbey.  It was a generous gift given freely from my heart. By this time I knew the monastics who lived there and would be living with the window.

I had been creating stained glass windows for more than thirty years and always felt that these works of art were “my windows.” I always signed my name. This one was different. I felt that this was “their window.” The usual sense of ego gratification wasn’t there….well, OK…maybe just a little bit it was there, but I did not sign my name on the window. Well and good. Job done.

Not quite.  In 2012 construction began on another building, Chenrezig Hall.  I received an email from Venerable Tarpa inquiring if I would be willing to create another window for the Abbey. Sure. This one was to be of the Buddha of Compassion, Chenrezig. Wow. This was an entirely different ask, and not just because the window would be extraordinarily complicated. This Buddha has one thousand eyes in the palms of one thousand hands attached to one thousand arms.

People consider His Holiness, the Fourteenth Dalai Lama of Tibet to be a manifestation of this Buddha. I would be charged with creating a “portrait” of His Holiness. I am a huge fan of his! I have been blessed with the great, good karma to have attended many of his teachings and even received a one-on-one blessing from him; the living, breathing incarnation of the Buddha of Compassion. Three years later the window was installed. I didn’t sign this one either.

So now I am about to begin construction on window number three.  The four-armed version of Chenrezig, the Buddha of Compassion.  This window will also be installed in Chenrezig Hall, in the Kuan Yin room…a small room adjacent to the main hall where the thousand-armed window is.  At this point I fully realize my practice of generosity.  I am giving a gift to thousands of people I will never know.  Maybe even more than that.  When I think about these people, my heart is filled with love and compassion.  I hope these windows help them find peace in their hearts, just as my knowledge of them has helped me find peace in mine.

I am grateful to the monastics of Sravasti Abbey for giving me this unbelievable, once-in-many-lifetimes practice of generosity.  Thank you

Read how Bev’s creative process is like a meditation.