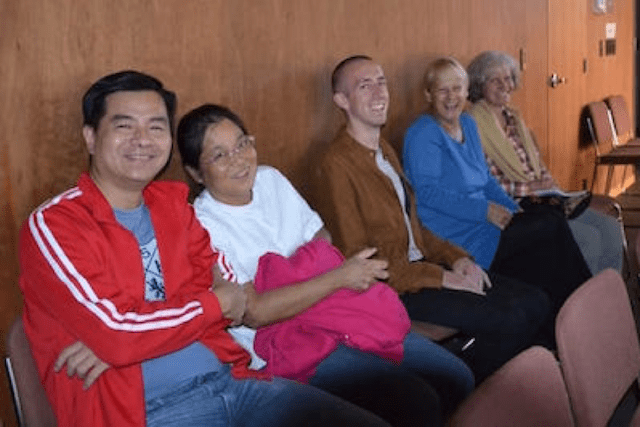 Spring lasted until the solstice this year and has been very green.

The first turkey chicks have hatched and three moms are sharing supervision of 13 or 14 little ones. We can hear them in the tall grass, but can’t see them until they venture onto the paths.

It’s wonderful to welcome guests from all over the world to the Abbey. Everyone shares a common love for the Dharma and works together harmoniously.

Six young adults took advantage of the Abbey’s annual week of Exploring Buddhism for Young Adults. They came from a variety of backgrounds, which added special richness to their sharing with each other: one from Alaska, one from Colombia, two of Mexican heritage, one from New Zealand, and one from Sandpoint, Idaho.

Ven. Chodron, with help from Ven. Damcho, gave daily Dharma talks and led discussion groups. Other Abbey monastics gave the Bodhisattva’s Breakfast Corner talks and led the young adults in offering service in the forest, baking bread, and other activities.

The exchange among the participants was deep and meaningful to them. One young man thanked the group and the Abbey for helping him to open up emotionally, and all of them were determined to take what they had learned back with them into the “unreal’” world.” Everyone had a good time, and hilarious skits concluded the week.

Check out the photos here, and listen to the talks here.

Our monthly Offering Service Saturday & Sharing the Dharma Day weekend always brings together a wide variety of people. This month they came from as near as Spokane to as far away as Germany, Australia, and Singapore. One of many things we love about the Abbey is our diverse community! See photos from the weekend here.

On Offering Service Saturday, participants worked in the forest (we’re cleaning up the knoll known as Sukhavati), in the flower garden, and kitchen. Some laid a new stone path to Prajna Cottage, while others strung malas (prayer beads) for the prison inmates who request them.

Over 50 people then came for Sharing the Dharma Day, where Ven. Chodron gave the Dharma talk based on An Open-Hearted Life, a book she co-authored with Dr. Russell Kolts from Eastern Washington University. The chapter this month dealt with how compassion gives us a new kind of strength to face whatever we encounter in life. Ven. Tsepal led the discussion, which centered on how we can work with difficult emotions that arise when we encounter others’ suffering. Watch Ven. Chodron’s talk here.

The Abbey community is very grateful to Patricia Maarhuis, who works at Washington State University counseling students on substance abuse and sexual harassment. Patricia, who has participated in Abbey retreats and regularly offers us her gardening skills, volunteered to do workshops on these two important topics at the Abbey.

An excellent speaker, Patricia skillfully tied together many factors in college students’ lives that lead to date rape and the problems attendant with intoxication. We will invite her to come again, because it is important that we are knowledgeable about these social issues so that we can counsel people who turn to the Abbey for support.

Buddhist Monastics @ the Museum of Arts and Culture

Gen Heywood, a photographer who visited the Abbey several times last year, arranged for Ven. Chodron to give a Dharma talk and Ven. Chonyi to lead a meditation workshop at the Northwest Museum of Arts and Culture in Spokane. Gen’s beautiful photos of the Abbey were on display at the same time for all to see.

Preparing for the event, Gen, who is a United Church of Christ Minister, was so excited. “Buddhist culture has come to Spokane, Washington!” she enthused. The event attracted about 40 people and was enjoyed by all.

On June 2, inmates at Airway Heights Corrections facility celebrated Buddha Day and invited Sravasti Abbey monastics to participate. Two Abbey nuns and I attended. I had never been to a correctional facility before and was both excited and nervous.

We monastics were invited to speak and took turns addressing the congregation. I was not aware that we would give a talk and was unprepared. I made a silent prayer requesting inspiration, and then spoke about my experience working with anger and the Dharma tools I found most helpful to deal with it. As I spoke, I felt a sense of closeness and friendship toward those in the audience.

At the end of the event, many came to shake hands with a smile and words of gratitude and appreciation. I felt privileged to have been there and to have gotten a glimpse of these men’s quest for inner transformation.

Looking back, I can see that my view of the incarcerated was one-dimensional, tainted by fear, judgment, and labeling. I expected to find hardened criminals, but instead I found human beings who, just like me, want happiness and not suffering. I learned that when we dehumanize others, we ourselves are diminished; and when we recognize the value and humanity in others, we are restored.

Ven. Samten also visited the prison for Buddha Day and gave this Bodhisattva’s Breakfast Corner talk about her experience.

A diverse crowd of more than 60 people—young children to the very old—gathered for Spokane’s third annual Interfaith Pride Service.

The interfaith event especially serves people who feel disenfranchised or abandoned by their churches because of who they are. The service included an invocation by local slam poets, a rocking spiritual band, and “sacred words”—brief mini-sermons—from eight speakers who universally shared messages of love, forgiveness, and inclusion.

Afterwards, people thanked Ven. Chonyi for bringing the Buddhist voice with its explicit emphasis on love as the antidote to hate. Spokane’s Interfaith Pride Service is unique in the US, and many people shared how healing it was for them to attend.

Ven. Nyima represented Buddhism and spoke together with representatives from Christian and Unitarian churches. Having worked with Child Protective Services prior to becoming ordained, Ven. Nyima was able to talk about spirituality in the context of working with at-risk families and children.

The panel discussion was informal and light-hearted, yet rich in providing different religious perspectives as represented in the panel. Questions ranged from how people chose their faiths, to death and rebirth, as well as views on sexuality and gender identity. Ven. Nyima enjoyed listening to the other speakers as well as sharing a Buddhist perspective.

We are delighted to host a two-week visit by Ven. Tenzin Choyang, born in Tibet and now training at Jangchub Choeling Nunnery in India. She is on a two-year scholarship from the Tenzin Gyatso Foundation to study science at Emory University in the US.

Ven. Choyang is not only dedicated to her Buddhist philosophical studies, she is also involved in the Reimagining Doeguling committee that seeks to benefit the Tibetan settlement where the nunnery is located. She shares about the importance of studying logic in this talk. See photos here.

Dr. Nicole Ackerman, Assistant Professor at Agnes Scott College, wrote to Ven. Chodron to share her enthusiasm for teaching physics to Tibetan monastics, especially nuns, which she does yearly through the Emory-Tibet Science Initiative.

She says, “The nuns are impressively dedicated to their learning. After having three 1.5 hour class sessions with us, the nuns (staying in the guest house) returned every evening for another 1.5 to 2 hours of discussion and review. I understand that the Jangchub Choeling nuns had a similar review every evening, and they came back to the center for the review before the test.

“In class, they frequently asked questions when they didn’t understand the material and were quick to volunteer answers to questions we posed. We used color response cards to see everyone’s answers, and we usually had 100% participation (which did not happen with the monks). When the class favored two or more different answers, the nuns were willing to do out the problem on the board or explain their reasoning, even if they knew there was a high chance that they were wrong. That would not happen with American students!”

For more about Tibetan Buddhist nuns, you can read the life story and see photos of Geshe Chopa Tenzin Lhadron. She is one of the first female geshes, who received her degree in 2016. Geshe Lhadron visited the Abbey and gave some talks last summer.

Sravasti Abbey posts about 500 video teachings to our YouTube channel each year, drawing over half a million views. That’s a lot of video, and our five-year old iMac is showing its age.

In addition, volunteers are now helping to edit past teachings, such as Geshe Lhundup Sopa’s Engaging in the Bodhisattva’s Deeds from 2009, which are posted here, and Khensur Jampa Tegchok’s commentary on Nagarjuna’s Precious Garland of Advice for a King from 2008, which can be found here.

To help with the growing load of Dharma videos, we’re seeking sponsors for a second video editing computer.

If you would like to make an offering for this, please write the Abbey office.

If you would like to help edit videos from afar using iMovie, please let our office know too.

Ven. Chodron had cataract surgery in one eye in early June and just completed the surgery on the second eye. She said the surgery was easy and painless, and marvels at the improvement in her vision.

A local newspaper, the Coeur d’Alene/Post Falls Press did a story on the Abbey. Read it here.

The Spanish translation of Seven Tips for a Happy Life by Ven. Thubten Chodron (Los Siete Consejos para la Felicidad) is on the web! Read it here.

Read Ven. Lamsel’s essay on the power of an idea.

Ven. Nyima writes about working with our “buttons.” Or watch her Bodhisattva Breakfast Corner video on the same topic.