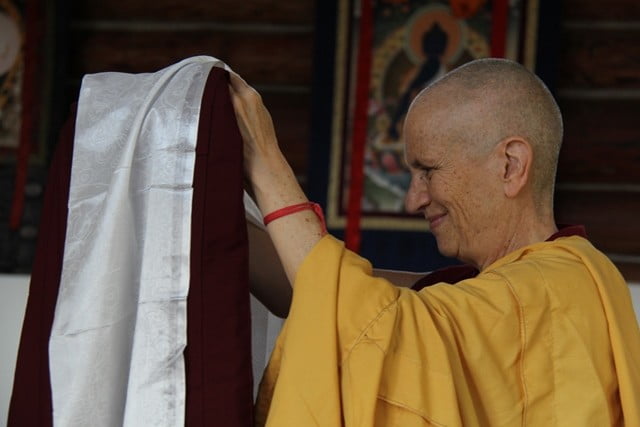 On April 24, the Abbey will joyfully celebrate kathina (pronounced kuh-teen-ah) and thank the huge network of volunteers who support the Abbey’s mission. Established by the Buddha, the ancient ceremony of kathina is a time to rejoice in the virtue created by the sangha during the monastic retreat (varsa) and the concluding ceremony (pravarana). It also celebrates the interdependence of sangha and the lay community.

Kathina will be broadcast live on our YouTube Channel, beginning at 7 pm Pacific Time. See the event listing for more details. 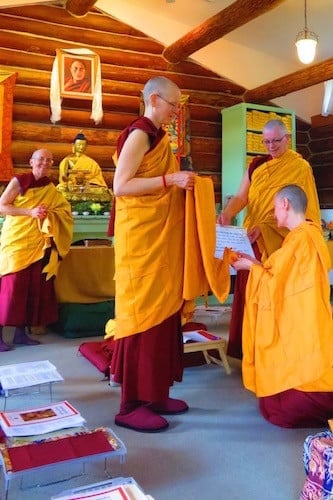 Historically, the kathina is especially for the offering of monastic robes. At the time of the Buddha, cloth was hard to come by. In addition, monastics’ robes were usually worn out after retreat. The kathina rituals include offering a  “robe of merit,” a new robe that lay people formally offer  to the ordained sangha. The sangha, in turn, gives the robe to a monastic who needs it most.

In Asia, the kathina is a huge community festival. One of the Abbey’s Theravada friends told us they sometimes even have an elephant in the parade of offerings! Ingenious Abbey friends created a moose placard to lead our offering procession, an American Pacific Northwest twist that replaces the elephant. 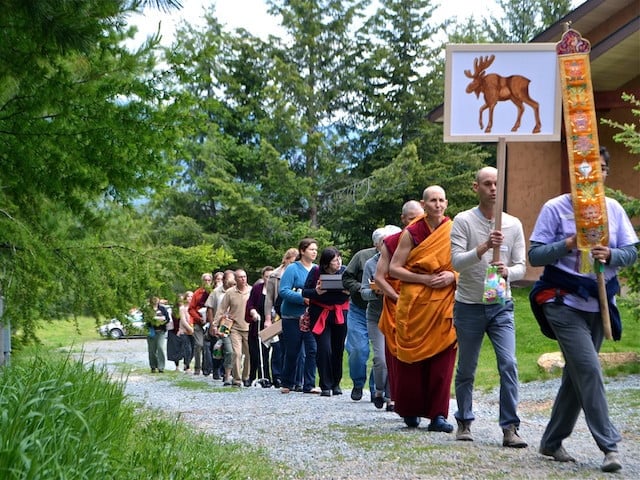 At the Abbey, we typically begin our kathina celebration with a procession of guests bearing their offerings. Everyone then gathers in the Meditation Hall, where the formal ceremony begins.

With chanting and a Dharma talk, the monastics invite the lay guests for brief inside look at sangha ceremonies. Then a representative offers the robe of merit to the abbess or senior monastic on behalf of the entire lay community.

Usually, we conclude kathina with a festive vegetarian potluck lunch, but this is not possible in this time of Covid.

Our online ceremony will include the ceremonial offering of the robe of merit to our abbess, Venerable Thubten Chodron. The Ong family in Malaysia has kindly sponsored the robe of merit this year. Thanks to Zoom, they will be able join in the formal ceremony. We hope you’ll be there too! 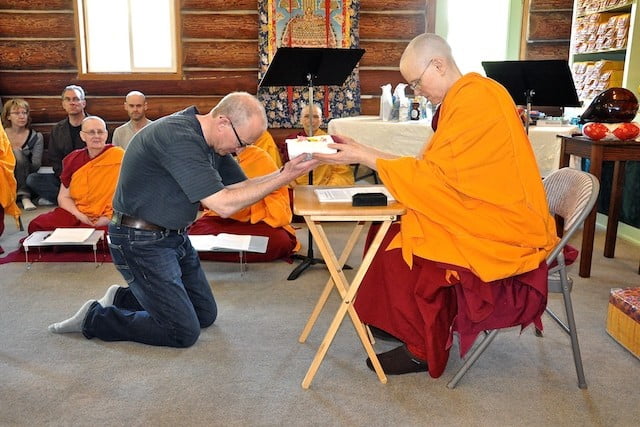