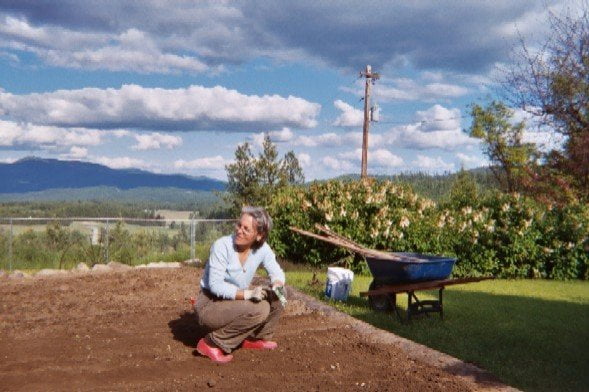 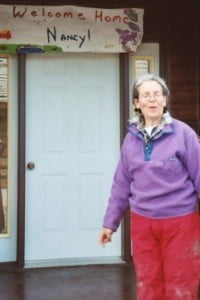 For Nanc Nesbitt, the commute from Seattle to Sravasti Abbey was just too much. In the Abbey’s first six months, she made the twelve-hour, round trip drive seven times to help her teacher, Thubten Chodron, get things started (Read Nanc’s inspiring “Want a Break from Your Busy Life?”).

Following ten years as resident teacher at DFF, Venerable Chodron left Seattle to found an abbey to train Western Tibetan Buddhist monastics. After a thorough search and with generous financial support from around the world, she purchased the 240-acre Newport property last October.

Nanc’s commitment to the vision goes back a long time. “The Dharma in the United States is fragile,” she says. “For it to have a solid, clean foundation, it needs people who can really take it to their hearts and practice it.” In Nanc’s mind, that means ordained monks and nuns. Nanc vowed to support Venerable Chodron’s vision in any way possible and promised to move to the Abbey “someday.” A few snowy trips through eastern Washington and the scale of the Abbey’s physical needs accelerated her decision. 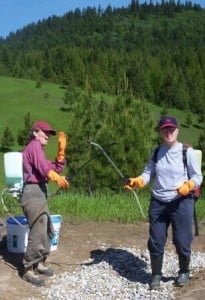 Nanc and Ruth spray the meadow to get rid of knapweed, a noxious plant that has spread a lot in the area.

The Buddha identified four requisite conducive conditions for monastic life: food, shelter, clothing, and medicine. Nanc is chairperson of the Four Requisites Committee of Friends of Sravasti Abbey, a lay volunteer support organization. Local volunteers in nearby Coeur d’Alene, Idaho provide most of the Abbey’s weekly grocery needs, so Nanc focuses on the shelter aspects. She has supervised the remodel of the main house basement to create additional bedrooms, now close to completion. Her next task is to get contractors started on turning the log cabin garage into a modest meditation hall.

More than fifty volunteers have come from Washington, Idaho, Oregon, Montana, Colorado, and Wisconsin (so far) to participate in the Abbey’s monthly volunteer service weekends. Nanc finds jobs for all of them: cleaning, gardening, taping and mudding, and painting. “I’m a salt-of-the-earth kind of gal,” Nanc explained, “and I want to do that salt-of-the-land kind of work to help establish the Abbey.”

Nanc will live in a tiny log cabin, formerly used as a tool shed, at the foot of the garden behind the monastic residence.

As with all visitors and residents, she will keep the monastic schedule, which includes daily meditation practice, and will adhere to Abbey community discipline.

At present, Venerable Chodron is Sravasti Abbey’s only full time, ordained resident. Venerable Tenzin Tsepal (formerly Lynn Gebetsberger of DFF) visited for four months in the spring, and several visiting monastics will come through this summer. The Abbey needs to create more living space and complete the meditation hall before it can accept applications for monastic trainees.

“Building a monastic community takes time,” Nanc said. “First, we need to provide a beautiful environment for serious students to come and train with Venerable Chodron. Already the energy of the place is so harmonious and the land is beautiful. It’s amazing to watch complete strangers come together for volunteer service, connect almost instantly, and become a spiritual community. “Nanc’s wish appears in a dedication on the Sravasti Abbey web site. “(Through) training monastics in North America,” she wrote, “the pure Dharma will flourish like a wish-granting tree for a very long time and that qualified teachers (will) arise and teach the Dharma throughout the ten directions.”

For Nanc the commute is over. As she says, she is “eating, sleeping, and breathing” Sravasti Abbey. Through her joyous effort and that of many others, the dream will surely come true.

Click here to find out how to get involved with Sravasti Abbey.