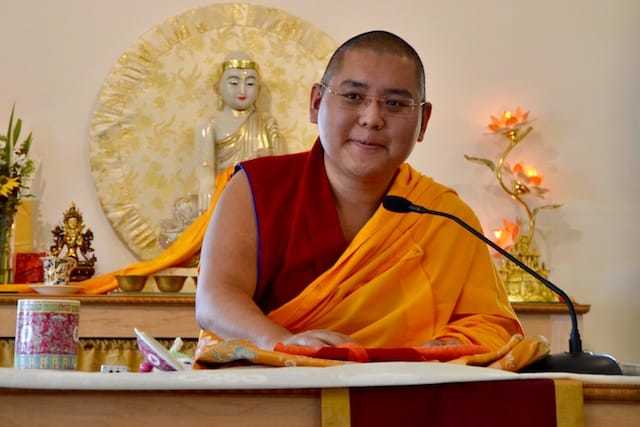 Over three days, His Eminence the 7th Ling Rinpoche visited Sravasti Abbey. And what a joyful visit we had! Rinpoche wanted to see everything, so his Abbey tour included a peek into public and private rooms and a bumpy ride through the forest. It was a time filled with teachings and learning. And, of course, repeated requests for Rinpoche to return. Ling Rinpoche’s visit made an auspicious connection for the Abbey and all our friends who attended.

The 7th Ling Rinpoche was barely a toddler when he was recognized as the reincarnation of the 14th Dalai Lama’s senior tutor. You can read about Rinpoche’s discovery and his previous incarnation, the 6th Ling Rinpoche, whom His Holiness the Dalai Lama calls his root guru.

The 6th Ling Rinpoche also gave novice ordination to a particular young American nun. He named her “Thubten,” after his own lineage  and “Chodron,” which means “the lamp of the Dharma.” Decades later, after this nun founded Sravasti Abbey and began to ordain nuns, they also received the name “Thubten.” Thus the link to the Ling Rinpoche lineage is strong for Abbey monastics.

In a welcoming speech on Rinpoche’s arrival at the Abbey, Ven. Chonyi pointed out the Abbey’s dependence on the Ling Rinpoche linage. She then read verses that the 6th Ling Rinpoche had written when he taught the Dharma in New York over 30 years ago. “By the force of inspiration from the unfailing Three Supreme Gems and of the truth of our taking universal responsibility,” she read, “may the precious Buddhist teachings flow and flourish in all lands throughout the length and breadth of the West.” (Read his full prayer here.)

Ven. Chonyi continued, “Here, in what we believe is the only log cabin gompa (meditation hall) in the world, Tibetan Buddhism meets Americana. We feel Sravasti Abbey plays a small humble part in bringing the requests of your predecessor’s prayer to fruition.”

Rinpoche responded by encouraging the community to study and never become complacent. “There is always more to improve,” he said. “I’m very happy about what you are doing already, but I do encourage you to keep on doing it. So work hard!” (Watch the welcoming words and Rinpoche’s opening comments here.)

Chenrezig Hall’s dining room was packed the next day when Ling Rinpoche gave his main teaching on “A Song of the Four Mindfulnesses,” a text by Kelsang Gyatso, the 7th Dalai Lama. About 100 people attended.

Rinpoche has followed the Abbey from afar for many years, and spoke about his impressions in the opening session. “Today, I would like to start off by offering my very warm greetings to everyone. I’m certainly very happy to be here today.”

“Before arriving to the Abbey, I had the opportunity to hear about it and also see some photographs. But since actually arriving here yesterday and seeing the place physically for myself, I certainly feel great happiness in seeing what kind of place this is. It’s very clear that this place is full of a calm; it’s a very pleasant atmosphere, peaceful and happy. Seeing this, I feel especially happy at having arrived here for the sake of creating an auspicious link or a sense of auspicious dependent arising between us, it’s very wonderful that I have the opportunity to come. Seeing the people who have contributed to building this monastery, and all the hard work that has gone into that, I’m very happy to see that.”

Rinpoche then gave a very clear and inspiring teaching on “The Song of the Four Mindfulnesses —mindfulness of the spiritual mentor, of great compassion, of our potential to attain a divine form, and of the view of emptiness. His concluded, “I’m very happy to have had the opportunity to come to the Abbey to share this text with you. I can see that there are many people here who are studying very hard through a great sense of determination and encouragement in the Dharma. If you are able to study this text further, it would be of great benefit.”

“I would like to offer my prayers aspiring for each and every one to live their life here according to the Dharma, that you’ll have no obstacles to your lives and that all of your wishes and aspirations will be fulfilled.” (You can watch the teaching here.) See the photos.

Abbey founder Venerable Chodron wasn’t present for the teaching; she was meeting with His Holiness the Dalai Lama in India. But Rinpoche acknowledged her efforts to establish Sravasti Abbey. “I really feel that (the Abbey) is situated in a very peaceful environment,” he said. “I can see the harmonious work that you have all done together to produce it. This is not an easy job at all—a lot of hard work!  But I think I can see the sincerity of how it is done. If the intention and the motivation are not good, then the result doesn’t come out well. So this proves that it was done with unity, harmoniously, and this is due to everyone’s hard work together.”

“I would like to take this chance to thank you all for your hard work, and also for Thubten Chodron’s long-term vision,” he continued. “From ground zero, she started (this). Even though she is not physically here, I think she is mentally here—very much so. I can feel that. So please thank her.”

“Venerable Chodron has been a very committed disciple of the previous Kyabje Ling Rinpoche. She took her vows and she has kept them for the last 41 years, so that proves she is committed. I have my deepest respect to her. I would like to take this chance to say, ‘Thank you very much, Thubten Chodron.’ And I wish that she will be able to continue her devotion and her good work. Next time when I come here, I very much hope that she will be here.”

After the teachings, Rinpoche toured the land and buildings with the community. He was eager to accept the ride up the steep hill into the forest, and asked lots of questions about what he was seeing. It was a joy to share Sravasti Abbey with him! See more photos of the tour.

The next day, Rinpoche gave one more talk at North Idaho College entitled “Where Cultural Identity and Interdependence Connect.” Students, townspeople, Abbey monastics, and Abbey guests made up the audience of about 70-75 people.

Rinpoche’s talk was general in that he spoke about the shared human values of love and compassion that are so important across cultures, religions, and philosophies. His talk was specific in that he emphasized each person’s responsibility to enact these values—and teach them—in their own lives.

After a lovely lunch with the Coeur d’Alene Dharma Friends, we saw Rinpoche off to the airport on his way to teachings in Mexico.

H.E. Ling Rinpoche’s visit was a blessing for the Abbey, and we look forward to his return in the future.