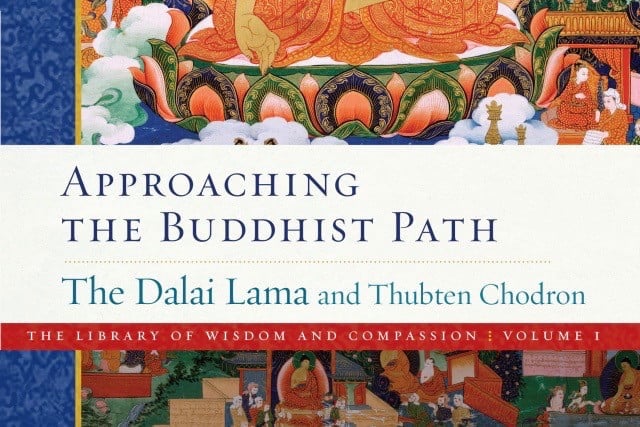 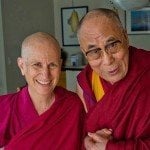 Join Ven. Thubten Chodron for a live weekly teaching on her book, co-written with His Holiness the 14th Dalai Lama.

Approaching the Buddhist Path helps students who were not trained in a Buddhist culture to understand the logic and reasoning that support Buddhist ideas.

The series begins Friday, July 20. There will be no live class on July 27, but you can listen to this teaching on the book. Or listen to this series of talks drawn from the book that Ven. Chodron gave in Germany this year.

Beginning with the universal human wish for happiness, Approaching the Buddhist Path presents the dynamic nature of the mind and includes reflections on Buddhist history and fundamentals. It also covers contemporary issues and the Dalai Lama’s own personal experiences.

Approaching the Buddhist Path is the first volume in The Library of Wisdom and Compassion, a series that collects His Holiness’ presentations of every step of the path to enlightenment.

Order the hard over or ebook from Wisdom Publications, Amazon, or your favorite book seller.

Ven. Chodron explains the origin of the series in the video below

An excellent and intellectually stimulating introduction to the Buddhist way of life.”—Publishers Weekly

“A distillation of all Buddhist wisdom, Approaching the Buddhist Path covers its history, philosophy, and meditation. Flowing in limpid language and powered by the dynamic reasoning of eminent Dharma authorities, it is suitable for all readers, beginner and advanced.”—Tulku Thondup, author of The Heart of Unconditional Love

“It’s truly wonderful that His Holiness and Thubten Chodron are collaborating to produce this much-needed series of books on the Lam Rim designed for a modern audience. These books will be highly beneficial for teachers and students alike!”—Kathleen McDonald, author of How to Meditate

“We are living in an era when religion and science appear to be at odds and neither relates deeply to philosophy, and when many people regard all three—religion, science, and philosophy—as having little bearing on their own personal lives or on real-world economic and political crises. In this series of volumes, beginning with Approaching the Buddhist Path, His Holiness the Dalai Lama, with the capable assistance of Bhiksuni Thubten Chodron, illuminates a path of awakening that is deeply integrative and utterly relevant to all the challenges that face humanity in the twenty-first century. Presented here is an authentic path to freedom from suffering and its inner causes and to tapping into the full potential of consciousness—our own Buddha-nature. There can be no greater gift than this.”—B. Alan Wallace, president of the Santa Barbara Institute for Consciousness Studies and author of The Attention Revolution