Manjushri on the Way 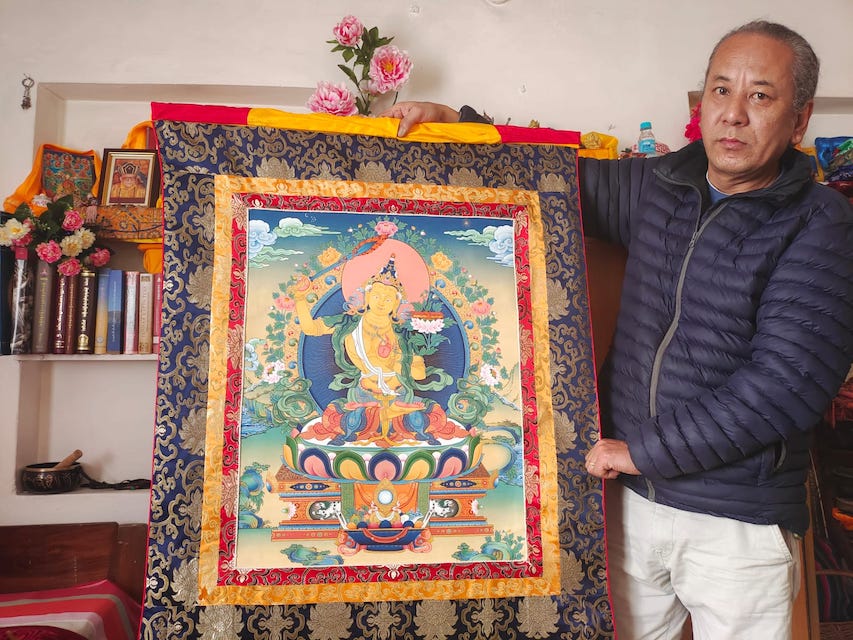 Thangka painter Tenzin Ngodop with his completed painting of Manjushri, Buddha of Wisdom, for the new Buddha Hall.

It’s become a Sravasti Abbey tradition that the buddhas arrive before the buildings do. This trend continues as the Manjushri painting slated for the new Buddha Hall is now complete. We see this as an auspicious sign that construction can soon be underway. 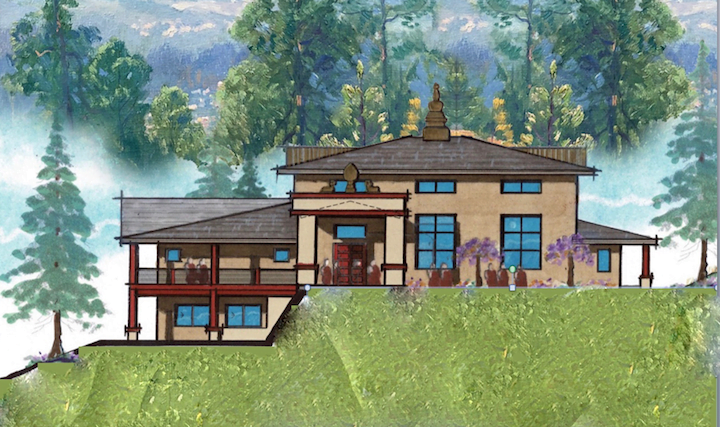 The Buddha Hall is a long-awaited 17,000 square-foot temple and library that will replace the Abbey’s cramped Meditation Hall. The Buddha Hall will become the center of religious life for the resident monastic community and for thousands of guests far into the future. After Covid-related delays, we look forward to moving forward in 2022.

The Abbey commissioned classical Tibetan thangka painter Tenzin Ngondup to create the beautiful image. You can see a video of his painting process here.  Winnie Young and Ralph Jimenez are the painting’s generous sponsors.

See the painting in progress. 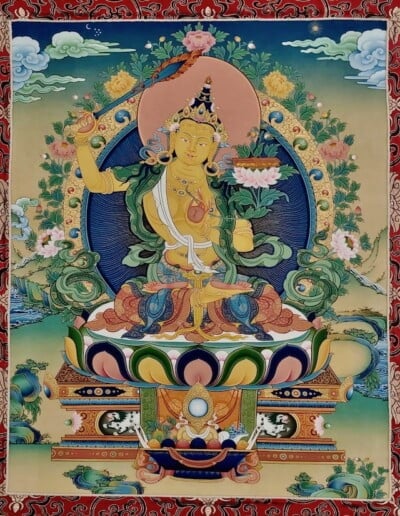 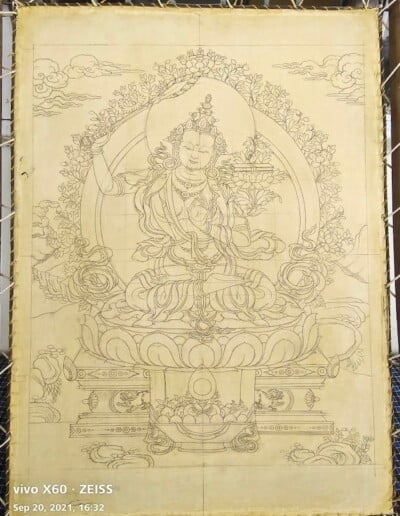 It starts with a precisely measured line drawing. 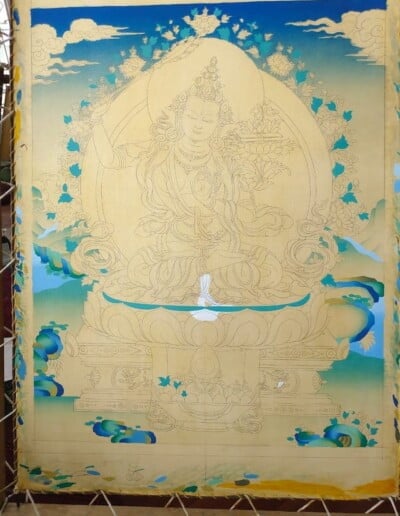 The first colors are added. 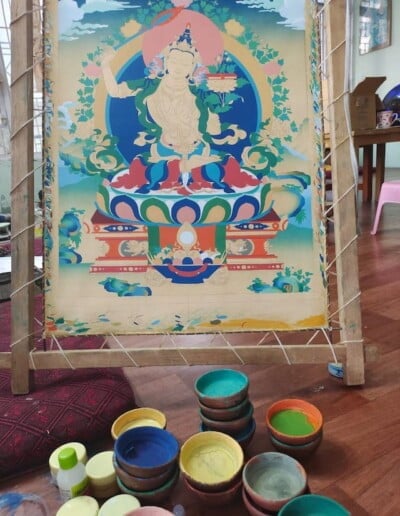 Many more colors fill in the background and embellishments. 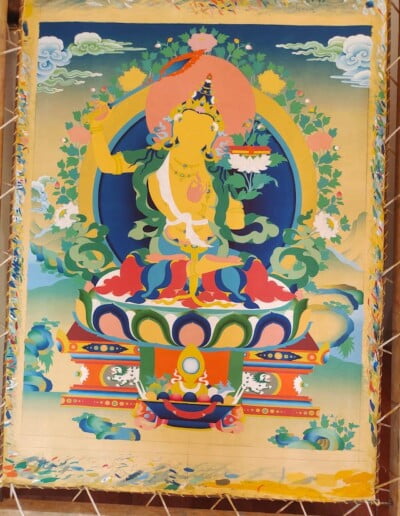 Details are still to come.

So many paint paint pots! And this isn’t all of them. 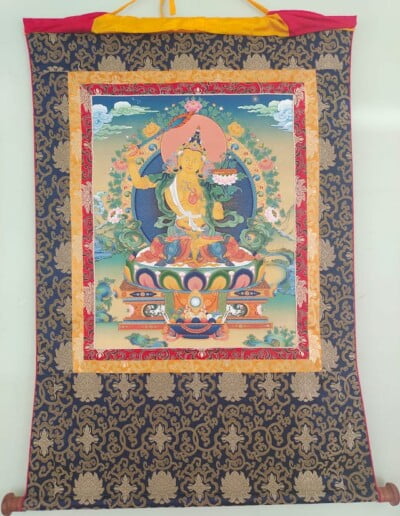 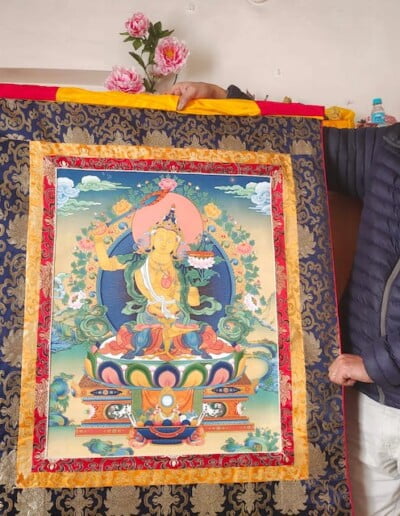 The Buddha and the artist.

The Manjushri panting will be shipped to the Abbey soon, where it will wait patiently for the Buddha Hall to be completed

The altar will also feature two standing statues—Venerable Ananda, Buddha’s attendant and Venerable Mahaprajapati Gotami, the  Buddha’s step-mother and the first nun. The statues are all in process. See an image gallery of the Ven. Gotami statue in progress.

The tradition of early-arriving buddhas began back before the Abbey found its final home. We see it as an auspicious sign.

In the early 2000s, when Venerable Chodron was looking for a suitable location to found the Abbey, friends at Shasta Abbey in California offered her two Tibetan-style paintings —one of Maitreya and one of Manjushri— for the new monastery.

The paintings were carefully stored as Venerable found and purchased the property in 2003, and turned the garage into a Meditation Hall in 2004. They have graced our main altar ever since. 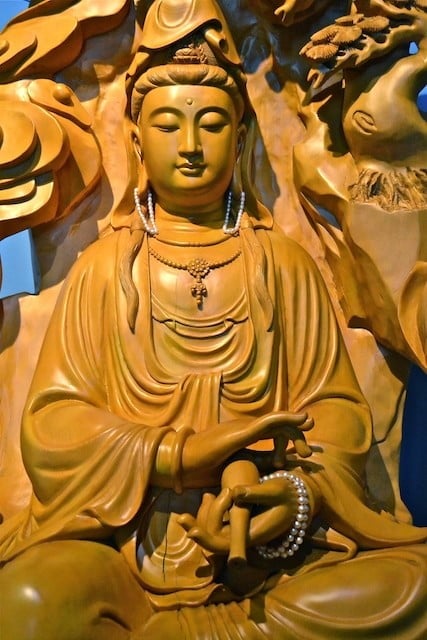 Then, again, the beautiful wooden Kuan Yin statue that greets visitors to Chenrezig Hall came into being before Chenrezig Hall did. Before construction began, a kind visitor to the Abbey surprised us with her generous offer to sponsor a large statue of Kuan Yin— the Chinese tradition’s embodiment of the Buddha of Compassion—for the entryway.

While Chenrezig Hall construction was underway, our friends in Asia found a beautiful cypress, wood Kuan Yin in China. She arrived in the summer of 2013.  We welcomed her with incense and blew the conch, then held her carefully until she could be installed later that year. Chenrezig Hall was consecrated in 2014.

We look forward to bringing you more Buddha Hall news in the coming months.