The Monastery that Refused to Burn 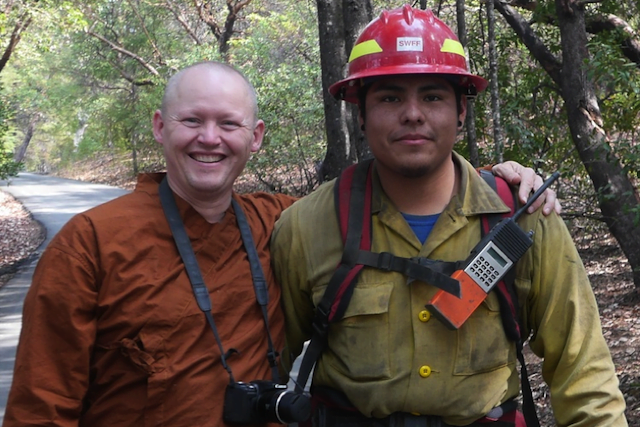 The Monastery that Refused to Burn

Our friends at Abhayagiri Monastery, a Buddhist Monastery in the Thai Forest Tradition of Ajahn Chah, were some of the many affected by the recent California wildfires. Thankfully, however, their story is not one of destruction.

At 2am, October 9, fourteen Abhayagiri monks and 12 residents awoke to red skies filled with smoke and the blast of the emergency air horn. Ajhan Jotipalo Bhikkhu relays that, “As soon as I opened the door, I could see the whole sky red. I said to myself, ‘That could be my death.’” The monks and residents quickly evacuated the monastery, the noise of exploding trees echoing in the background.

Notably, Abhayagiri had just celebrated its 20th year, with June 2018 expected to be its grand opening. When digital maps showed that a quarter of the monastery was on fire, the monks were left to contemplate that it may instead be a ‘grand closing.’

After a few weeks, the monks were able to return to their monastery to determine the extent of damage. In an email to Abbey residents, Ajhan Jotipalo Bhikkhu explained the extraordinary circumstances of the fire at Abhayagiri:

We just got back from the property. About as good of news as we could have hoped for. There are still about 100 personnel on the property, as fires are still smoldering, but it appears no structures were damaged, except maybe a bridge or two on the “loop trail” – which we should rename the “Sacred Loop Trail” Or “Dhamma Protectors Trail”…

I asked the crew from New Mexico how it was fighting the fire. They had been on the property for about 5 days. They said one evening that 10 battalions (20 to a battalion) were out on the loop trail fighting the fires coming down from the ridge. They reported that the fires got down to the loop trail but the fire wouldn’t cross the trail. They said it was like the monastery refused to burn, and none of them could explain it. They reported their hair sanding on its end and then the fire reversed itself and went back up the mountain. Everybody was kind of freaked-out, as they had never seen anything like this.

A notice posted on the Abhayagiri website conveyed a similar attitude of awe and gratitude:

We were extraordinarily fortunate to have experienced no damage to any of our structures, except possibly minimal damage to one of our ridge water tanks. There are likely many reasons for this blessing, with most of the credit going to the excellent work done by the multiple fire-fighting crews from many different areas. We also believe there must have been some very powerful protective forces on the property looking after the monastery as we had fires coming from several directions that seemed to unexpectedly reverse direction.

Yet the blessings the monks experienced went further than the prevention of fire damage. In a reflection following their return to the monastery, Ajahn Passano shared the depth of the fire fighter’s generosity: on the day of the monks return, one fire fighter brought 24-hours’ worth of boxed food—breakfast, lunch and dinner—for the community.

As Ajahn Passano acknowledges, such generosity is not unusual for monastics, who day-by-day live off the generosity of others. However, he said, “Sometimes you can get used to it because of the institutional nature of it. You can take it for granted.” In this way, what could be seen as a huge obstacle can be transformed into a blessing—the fires, by ‘throwing everything up in the air’, provide an opportunity to really connect and appreciate the generosity and kindness we are supported by each day.

Moreover, such circumstances are a reminder to continue creating the causes to be protected from devastation, and have conducive conditions to study and practice the Dharma. As Ajahn Passano concluded,

May we all take the opportunity that events such as natural disasters provide us, to reflect upon impermanence and death, recognize the kindness of others, and resolve to utilize our previous human life to—in Ajahn Passano’s words—”deepen roots of skillfulness and wisdom,” for the benefit of all. 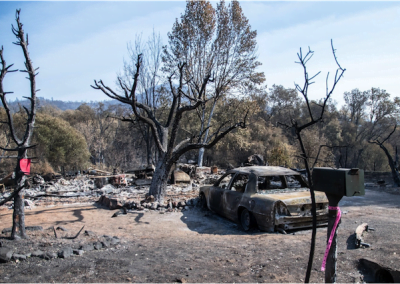 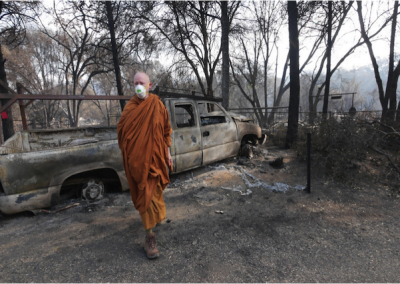 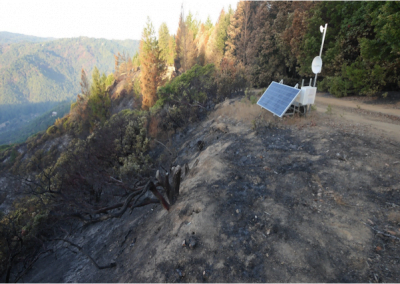 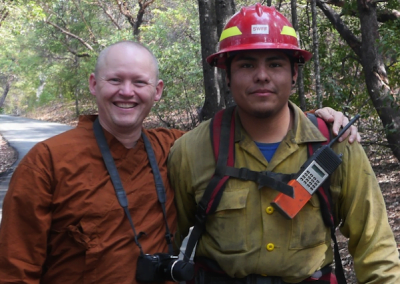