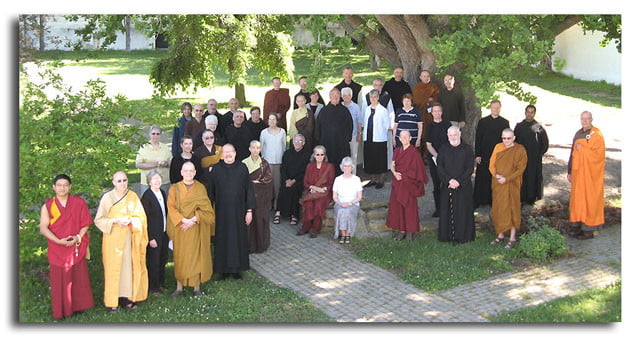 The glorious Kentucky countryside is the home of Gethsemani Abbey. The Trappist monks have lived here for over a hundred and fifty years. It was also the home of Thomas Merton, an environmentalist before there was a name for it.

As the climate crisis continues to escalate, one becomes much more aware of how lifestyles contribute to the current planetary state. As a monastic I appreciate the simplicity of life here at the Abbey where the community makes very intentional choices on how we live and how we utilize our planet”s resources.

So it was a pleasure to attend Gethsemani III, an interfaith dialogue on environmentalism between about 40 Catholic and Buddhist monastics, where we all shared what our communities are doing to lessen our “carbon footprint”.

Recycling is part of everyday life in most of the communities as are the ethic of harmlessness in regard to other living things and a gentle and caring stewardship of the land. Sparse use of vehicles was a common rule, particularly in the Buddhist monasteries. Many participants shared that changing cultural habits of consumerism is the number one challenge in regards to environmental awareness within their communities. The group gathers every morning to the sound of a chant or the words of a poem. Here Jason (in the upper right corner of the picture) a lay student from St John”s University in Minnesota plays his flute.

It was very exciting to find out that many of the monasteries have implemented alternative technologies into their infrastructures with varying degrees of success. A number of the Catholic monasteries have wind power as a source of their electricity as well as geo-thermal and hydro electric. On the Buddhist side, a number of them use solar power for most of their electricity, backing it up with propane or wood.

The most interesting difference between Buddhists and Catholic communities that I observed was in regards to the sustainability of the communities themselves. Following St. Benedict’s Rule, many of the Catholic monasteries raise their own food, including chickens and cows, making their own cheeses and such.

One of the monasteries makes musical instruments and Gethsemani is noted for its cheese and fudge. St Benedict was very specific about monastic communities fending for themselves. At present many of these communities are aging and keeping the “farm” going has become quite a challenge.

However from the Buddhist side, the Buddha set up the monastic communities so that the monks and nuns were dependent upon the lay community for their 4 requisites (food, clothing, shelter and medicine) in return for practicing and living in ethical discipline as well as teaching and guiding the lay community. Many of the Buddhist sangha eat only the food that is offered and depend very much on their lay supporters for many things. Ajahn Punnadhammo from Arrow River Hermitage in Thunder Bay, Ontario, Canada presents a talk on Buddhist understandings of the world and our place in it.

Unlike their Catholic brothers and sisters who are dealing with large, aging, vacant buildings, the Buddhist communities are growing slowly and are careful to use existing buildings if at all possible and to keep simplicity, energy efficiency and longevity in their planning.

Although we all shared that we were not perfect and had a ways to go in making our “footprint” much smaller, we all agreed that the monastic life of contentment with sufficiency is a wonderful model for the world now and in the future. We closed the conference with the following statement of intent, which sums up beautifully how monastic life can have a positive influence on the world.

Simple and Sufficient
Gethsemani III: Monasticism and the Environment
A Buddhist/Catholic Monastic Gathering
May 27-31, 2008

We live in a time of environmental crisis and calamity, but also in a time when more and more people are coming together to respond to the suffering of the world. Our monastic interreligious dialogue has brought us to a new awareness of the social and spiritual relevance of ancient monastic traditions that have been sustained for millennia by Buddhist and Catholic communities. Reverend Heng Sure from Berkley Buddhist Monastery in Ca. begins his presentation with this powerful quote from the Buddha.

Together we celebrate our common monastic values of reverence for the sacredness of all things, contemplation, humility, simplicity, compassion and generosity. These virtues contribute to a life of nonviolence, balance, and contentment with sufficiency.

We recognize greed and apathy as the poisons at the heart of ecological damage and unbridled materialism. Throughout the centuries, monastic life has inspired generous personal, social and spiritual effort for the good of others. We give and receive in the spirit of gratitude. We acknowledge our complicity in damaging the environment and will make a sincere and sustained effort to reduce our negative impact on the planet. We are committed to take more mindful, universal responsibility for the way we use and manage the earth’s resources. We resolve to develop our hearts and minds in ways that will contribute to a sustainable and hopeful future for our planet. We renew our commitment to the sacredness of the earth, relating to it as a community, not a commodity.

May our love for all beings and this world sustain our efforts and may our earth be revitalized. This is our prayer and commitment. Individual presentations were inter-mixed with wonderful group discussions where everyone shares their insights and aspirations.

*Conference Statement from the Monastic Men and Women of Gethsemani III