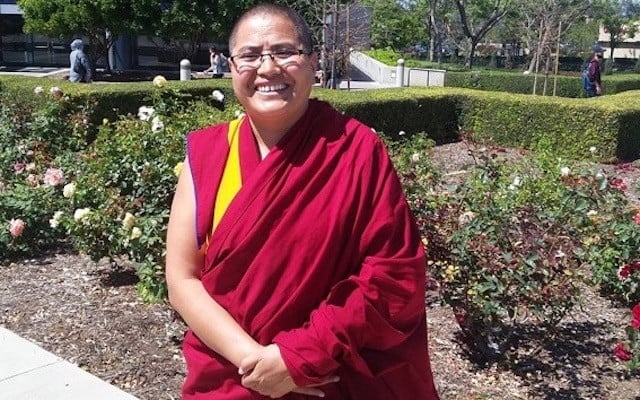 In December, 2016, His Holiness the Dalai Lama awarded the geshe degree to 20 Tibetan Buddhist nuns—the first in Tibetan history. The Tibetan Nuns Project website describes this historic milestone. Now the nuns are ready to teach, to share their Dharma knowledge. We are delighted that Geshe Chopa Tenzin Lhadron, one of the 20 new geshes, visited the Abbey in June and gave a>public talk on Saturday, June 24.

Here is Geshe Lhadron’s Story in Her Own Words

“I was born in 1977 in the Zanskar valley of Ladakh, which is located in the northern region of India in Jammu and Kashmir State. I have five sisters and two brothers, and we all grew up in a very simple and remote semi-nomadic family.

“I was very fortunate to have an audience with His Eminence Lochen Rinpoche when he visited Zanskar to give teachings in the late 1980s; I don’t remember the exact year. I was very young at the time, but I must have some karmic imprints to become a nun. When my mother asked me whether I wanted to ordain as a nun, I agreed without any hesitation. My father brought me to Lochen Rinpoche for the hair-cutting ceremony and from then on, I committed my life to becoming a nun. My grandfather and father taught me how to read Buddhist scriptures during the winter, and my mother taught me basic prayers like the Praises to the 21 Taras, Praise to Manjushri the Buddha of Wisdom, and so forth.

“In 1988, I received teachings and the Kalachakara Initiation from His Holiness the 14th Dalai Lama in Zanskar. My parents decided to send me to Dharamsala with another nun to get a better education, which I am grateful for. In 1989, at the age of 13, I joined Jamyang Choling Institute, an educational institution established primarily for Himalayan Buddhist women. During the Great Monlam Prayer Festival, I was incredibly fortunate to receive my novice ordination from His Holiness the Dalai Lama at his residence in Dharamsala. After more than 17 years, I completed my formal monastic education at Jamyang Choling Institute in 2005. Due to the blessings and unwavering support of His Holiness the 14th Dalai Lama and many of my kind teachers over many years, I am among the 20 newly graduated female Geshes (equivalent to a doctorate in Buddhist philosophy) for the first time in Tibetan Buddhist history!

“The study program at Jamyang Choling Institute includes Buddhist Philosophy as the core subject and Tibetan language, poetry, history, and English as additional subjects. I was also very fortunate to have opportunities to participate in a number of international conferences, study tours, seminars in Asia, Europe, North America, and conferences on Tibetan religion and the Gelugpa school of Tibetan Buddhism here in India. From 2009 to 2013, I attended an intensive science workshop for one month each year at Sarah College organized by the Emory Tibet Science Initiative. I participated twice in workshops organized by Science for Monks, and had the honor of creating an exhibition on climate change that involved taking a parallel perspective on Buddhism and modern science.

“I have also had opportunities to serve in the Jamyang Choling Institute administration for many years, including seven years as the secretary or assistant director, two years as the accountant, a year as the disciplinarian, a year as the chant leader, and a year as the store keeper. When I was responsible for managing the Jamyang Choling Institute office, I had the wonderful opportunities to invite His Holiness the 17th Gyalwang Karmapa Urgyen Trinley Dorje to observe the annual Tibetan nuns’ debate in 2008, and His Holiness the 14th Dalai Lama to bless the Institute and give teachings and advice to the nuns in the year 2009.