On Becoming an Anagarika 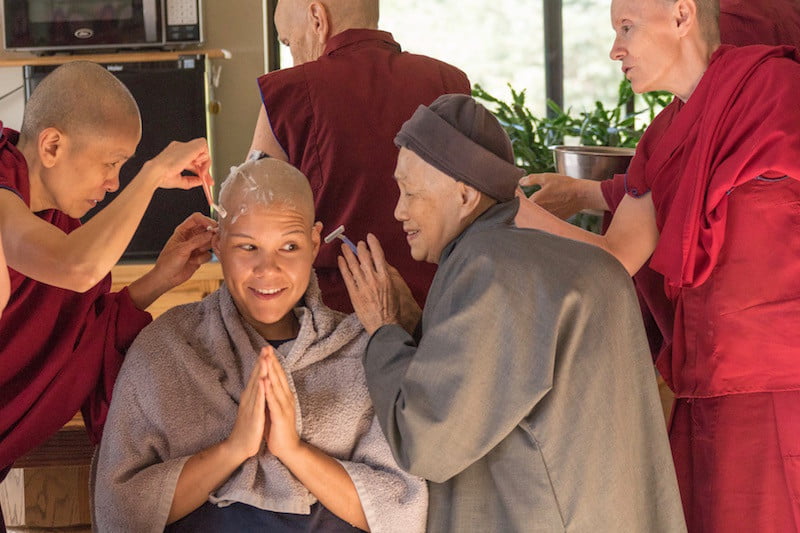 How often do we reflect on our entire life, from birth to this very moment? Most people don’t have the time or space until hitting their golden years. But I found myself doing just this on July 20, the day I took monastic training vows at Sravasti Abbey and became an anagarika.

The preceding days had been filled with tranquil joy punctuated with mild apprehension about shedding my “former” identity. Nothing in my 32 years had pointed in the direction of monasticism until I came to the Abbey in August 2016 for the three-week Exploring Monastic Life retreat.

The retreat opened my eyes to the beauty and simplicity of a lifestyle devoted to cultivating wisdom, love, and compassion. As I reflected, it became clear that what led me to take the anagarika precepts was my need to live in alignment with my deepest values. 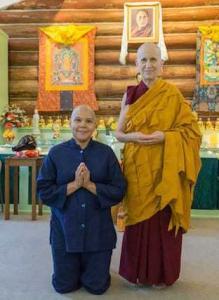 Since graduating from college ten years ago, I had lacked a clear direction in my career and life’s work. The only thing I knew was that I wanted to help people and make the world a better place. I landed a job in the federal government working in refugee and immigration policy and pursued all the prizes society promised would bring happiness – a plush apartment, fine dining, exotic vacations.

Still, my mind was unsettled, I did not fully understand or trust myself, and I was unable to forgive the world for its injustices. I did not know how to pursue my longstanding interests in metaphysics, the hidden potentials of the mind, and non-Western worldviews.

Eventually, I could no longer tolerate living a shell of a life. One year ago I set out to attend a series of retreats at Buddhist monasteries and taught English to little monks in Nepal. I spent the rest of the time living at the Abbey considering the monastic path, finally reaching a decision in early 2017 to request anagarika training.

After surveying the many different Buddhist traditions flourishing in the United States, it came down to finding the right community to practice in. I immediately felt a heart connection to the Abbey and its genuine and sincere community. Each person is encouraged to contribute their individual talents while developing new skills.

The Abbey’s long-term vision of establishing the Dharma in the West is quite palpable and we continually reflect of the kindness of our lay supporters through dedications and daily prayers. And hardly any places exist in the U.S. headed by such a qualified spiritual mentor as Venerable Thubten Chodron.

So at last I have a found a place where all my energies are channeled towards my deepest aspiration of benefitting others. I do not know whether this one year will end in ordination, but have no doubt that this is where I need to be right now. I know that I would not be traveling this path without the support of my family, friends, and many teachers and am taking this journey to benefit them just as much as myself.

Postscript: Christina took monastic ordination, becoming Venerable Thubten Kunga, in 2019. Read how she made her decision, and see her community bio.