Prison Dharma: Can You Remember a Time You Were Happy? 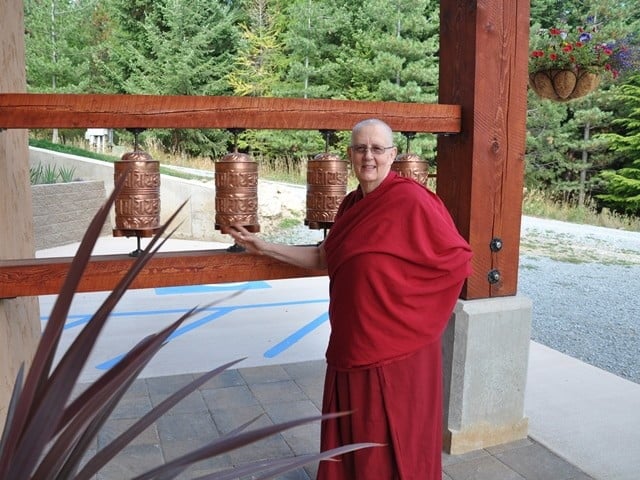 Venerable Thubten Jigme takes care of much of the prison correspondence for Sravasti Abbey. She visited the Washington State Penitentiary in Walla Walla and shares this report.

The first day I visited the minimum security Dharma group. These men have had no infractions for a year and have less than 3 years left on their sentences. About eight men showed up in the chapel. We began with some silent meditation, and then I talked about Buddha nature and what a meaningful life could be like. Some of the men asked questions about working with their anger and some talked about how the Dharma had helped them to transform their minds. All were very open and receptive and had been practicing Buddhism for some time.

We had heard that two of the maximum security units were on lockdown because of fights in the prison, so we called early the next morning and found out the unit we were going to would be open. We arrived at the prison 8:30 am. The security was much more intense than at the minimum-security prison, and many more guards were visible.

The Chaplain, who was very supportive and pleased that we were visiting, escorted us to the chapel. Soon the inmates began arriving. One of the volunteers described the group as fairly new to Buddhism. I again talked about Buddha nature and asked them to describe a time when they felt happiness. I broke the silence, asking if it was quiet because they couldn’t remember a time when they were happy. They all nodded. One fellow finally said he remembered feeling happy as a child. I asked him what he was doing, and he recalled celebrating a family members birthday. We then talked about different types of happiness and how the society gives us so many messages about happiness being something external.

A young man said this was his third trip to prison, and this time the sentence was for 24 years. He said it has taken him this long to realize that trying to get something by whatever means won’t bring any lasting happiness. Now, he told us, he is more interested in cultivating healthy relationships than trying to get material wealth.

Another inmate asked what role the Dalai Lama has in the world. I asked why he was asking this, and he told me that he would always see His Holiness with world leaders and wondered why that is the case. We talked about the qualities of an accomplished spiritual practitioner and how others gravitate towards one who has such compassion. We then heard a key in the door, and with the turning of the lock, the group filed one by one to shake my hand and left the chapel.