Reflections on the Vajrasattva Retreat 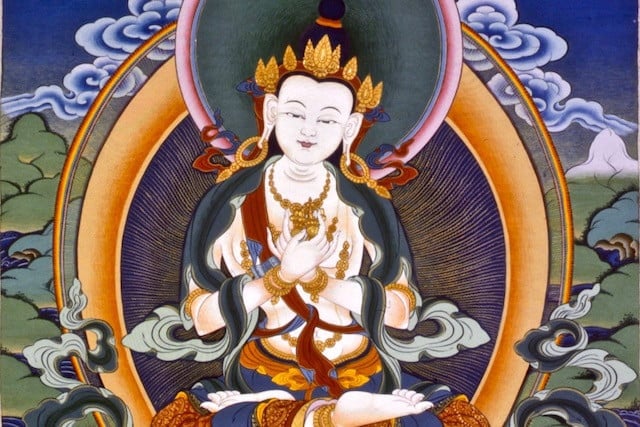 This past winter during the Vajrasattva Retreat at Sravasti Abbey, I finally completed the Vajrsattva ngondro or “preliminary practice.” In this practice, one recites Vajrasattva’s one hundred syllable mantra 111,000 times (100,000 times plus 11 percent to make up for errors):

Recitations are counted using a mala (string of beads) during each meditation session. Reciting one mala of 108 each day, the practice takes about 3 years to complete. But if just one day is missed, one must restart the count. During each session, one meditates on an action he or she regrets doing and how to do better in the future while reciting the mantra and visualizing purifying light and nectar from all the buddhas and bodhisattvas coming through Vajrasattva and into one’s body. In this way negative karma is purified.

I started the practice three years ago in late 2015,  but missed a day in February 2016 when things got hectic while preparing to move, and I forgot my session one day.  I wanted to wait until things settled down before starting again, but life got more difficult.  I had a hard time focusing on my Buddhist practice at all for over a year. Finally, in 2017, I gradually got back into daily meditation and in June of that year started counting Vajrasattva recitations again.

Besides doing the practice, preparing for retreat took quite a bit of effort.  First I made the determination to attend.  Then I worked hard at expanding my husband’s and my social connections so my husband would have support while I was away.  I had some physical problems to work out, too.  I took part in an intensive cardiac rehab program to get in better shape for some orthopedic surgery I needed.  I exercised and did physical therapy to improve my physical function.  Then I had knee replacement surgery and rehabilitation.  All these things increased the likelihood of a good retreat experience.  I saved what money I could for retreat dana and asked friends and family to make donations to help.  I worked hard to create the causes and conditions necessary to go on retreat, but could not have done so without the great kindness of many people.

By the time I arrived at the Abbey and began the retreat, I had recited the mantra over 71,000 times in formal sessions and was determined to finish within the month. I was in good enough physical condition to keep the retreat schedule and my husband had support from friends and family to manage his daily routine without me to steady him.

The retreat was held in silence for one month and all participants joined in five meditation sessions daily. There were some Q&A sessions and teachings, but mainly each of us focused on our own practice. Practicing together in this intensive manner greatly magnified the power of the practice.

Correcting faulty thinking is a huge part of the practice. There was probably something different every day that I realized had the potential to change my outlook on life. One emotional evening I was unaccountably overwhelmed with longing for my father, who has been dead for 16 years. I felt guilt for not being more attentive to my father in his last years. Desperately trying to manage my anxiety so I wouldn’t have to go wake one of the Venerables to comfort me, I realized I was taking the full responsibility for a lack of communication that came from both sides. I was exaggerating my father’s good qualities and downplaying his shortcomings. I also realized I was angry at him for not being the man I imagined he was. This was a recurring theme in my meditations during retreat —that many people have disappointed me simply by not living up to my unrealistic expectations.

When I began the Vajrsattva practice three years ago, it felt almost like an unattainable goal but knowing others who had done it helped me get past this doubt. Doing the daily work bit by bit has helped me to develop patience, which will help me maintain my long-term goal of developing bodhicitta.

The practice has also helped me learn the difference between having regret for an action and feeling guilt. Regret helps me learn from the experience, while guilt makes me try to hide my wrongdoing, even from myself. With regret, I can apologize to people without loss of face, accept my responsibility, and make amends.

Examining my behavior day after day helped me to become more aware of more subtle transgressions that I will try to avoid in the future. I still have a long way to go to behave like a bodhisattva, but having a method to follow to transform my mind bit by bit helps me get closer to my ideal.

Visiting Sravasti Abbey always gives me more energy to practice when I come home. Sharing practice with the monastic community helps me better understand the practices and gives me enthusiasm.

I plan to continue purification practices such as Vajrasattva after I have completed this ngondro because the positive effect on my mind has been far too powerful to ignore. I feel happier and more peaceful. I hope I can continue to practice transformative practices such as this in order to live more peacefully with others and serve others well.