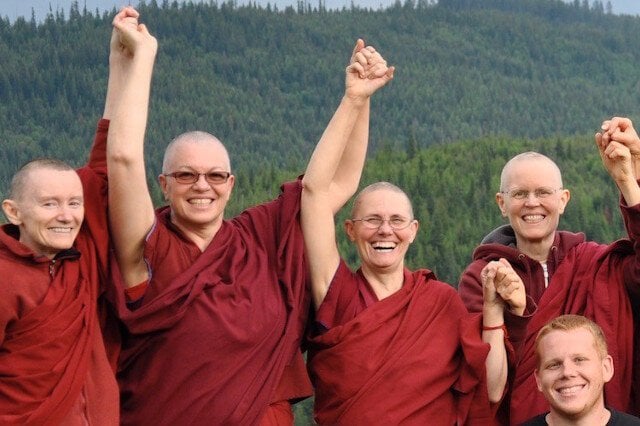 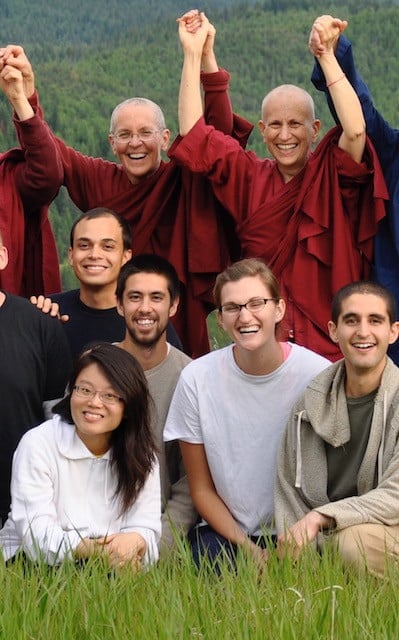 When the Buddha established the Sangha, the monastic community, each person ordained ten years or more was considered sufficiently
informed about monastic lifestyle and precepts and was thus accorded a voice when the assembly met to decide important matters.

Extending this by analogy to present circumstances, Buddhists who are informed citizens should vote. By sharing our knowledge, voting is one way to contribute to the welfare of society.

A common misunderstanding exists that Buddha wanted his followers to leave society. This is incorrect. Where can we ever live where we are entirely disconnected from other living beings?

In a monastery, in a Dharma center, in a family, we are always in relationship to those immediately around us as well as to the broader society and to all sentient beings. Even in a remote hermitage, we still live in relationship with each and every living being. Our challenge is to make this relationship a healthy one, physically, verbally, and mentally. With a pure motivation, voting and being politically active can be ways of sharing our vision, and values with others, in an attempt to stop harm and create happiness in society.

The challenges of being an informed voter and a wise citizen are many. For example, how do we keep abreast of current issues without being swept away by the media blitz? How can we learn enough to make wise choices without becoming involved in trivial affairs or allowing attachment and anger arise towards candidates and their views?

This involves discipline on our part. We need to have a wise relationship with the media, knowing how much we can handle, discerning media excesses, and halting our infatuation, distraction, and addiction to TV, radio, newspapers, and the internet. We only develop this balance by examining our own minds, and by trial and error in our daily lives.

Another challenge is forming wise views without clinging to them as part of our ego identity. “I am a Democrat,” “I support affirmative action.” We can all too easily solidify these labels into identities that we then feel compelled to defend. How can we have views and yet make sure our minds are tolerant of others who hold opposing ones?

Sometimes it seems to me that some Western Buddhists expect all other Western Buddhists to have similar political views. A woman in our center had to remind us during a discussion on compassion and politics, that she was a Buddhist and a Republican.

We must also be mindful not to make the opposition party and its candidates into solid figures that we then disapprove of, ridicule, fear, and even hate. One person once said to me, “I have compassion for almost everyone, but don’t know how to have compassion for Republicans.”

If, in the name of caring about the welfare of all sentient beings, we condemn those who hold different views, we have adopted their mental state: we help our friends (those who agree with our opinions) and are hostile to our enemies (those who have different views). Much meditation is necessary to separate people from their views, knowing that although someone’s views may seem harmful, those people still have the Buddha potential. Repeatedly re-forming our attitudes is required to develop equanimitytowards all.

How do we use Buddhist values to inform our political decisions? Or do we first decide what we believe and then select a quotation from the Buddha to validate our opinion? For example, one person could say, “The Buddha believed that people should make their own decisions and be responsible for them. Therefore, as a Buddhist, I am pro-choice.” Another person could say, “The Buddha said killing is a destructive action. Therefore, as a Buddhist, I oppose abortion.” In other hot social and political issues, similar things occur.

Yet another challenge lies in choosing compassionate methods to accomplish our political and social goals. For example, do we boycott Chinese goods and oppose China having MFN status because we want freedom for Tibet? Many people do, yet His Holiness the Dalai Lama opposes such action because it will harm the average Chinese who is not responsible for the government policy on Tibet. As a supporter of freedom for Tibet, do we ban together with a political leader who also opposes China, although some of his other political views may be repugnant to us?

By now, we have found ourselves deep in questions. Each of us must spend quiet time in reflection, looking at our own mind and coming to our own conclusions. While the cushion leads us to compassionate action in the world, these actions lead us back to the cushion. They are interdependent.

This article was first published on thubtenchodron.org in July 2012, and posted here in 2016.

Check out Buddhists & Yogins United to Help Get Out the Vote

Find out how to help: volunteer for voter registration, encourage absentee sign-ups, and support voter engagement.