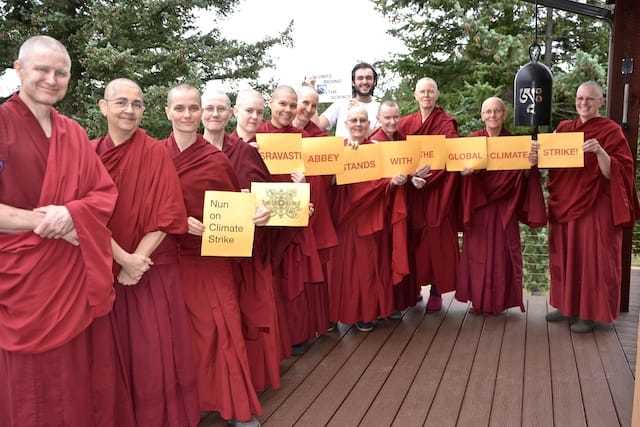 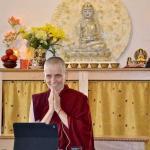 People sometimes advise Sravasti Abbey monastics that they should not talk about politics in Dharma teachings. However, our teacher Ven. Chodron has not shied away from speaking openly about social and political issues to help us understand them from a Buddhist and ethical perspective.

Everyone Needs to Speak Up

I believe that monastics should not be limited to prayer and meditation and should express their opinions on important issues. Monastics and laypeople have to support each other to overcome the hardships we face collectively. We are all totally dependent on each other, and the suffering of another person affects our own life sooner or later.

Everybody has the right of free speech. Even the Buddha himself spoke about social issues, such as the caste system that existed during his life.

Tibetan Buddhist teacher Mingyur Rinpoche stated, “When the Buddha formed his own community, he upended the age-old tradition of the caste system and allowed people from all walks of life into the sangha. It was not perfect. Women were not afforded the same status as men. But it was a revolution at the time. He did not simply pray for the suffering of the caste system to end. He used the power he had to actively change the systems of his day that were causing so many people to suffer.”

Like the caste system of ancient India, racial discrimination is an unjust system that leads to prejudice and violence.  As a young prince, the Buddha lived a life of power, wealth, and privilege—as many of us do now— but he gave it up to be of highest benefit to all beings, which included dismantling the prejudices of his day.

Lessons from Communist and Nazi Germany

I grew up in East Germany, the German Democratic Republic (GDR),  in the era when it was a Soviet Bloc country. I lived in that dictatorial system for huge parts of my childhood and faced oppression in a variety of ways. But later I learned the value of freedom, free speech, and non-violent activism when East German citizens rose up in the autumn of 1989 with a peaceful revolution to end the repressive government.

More than 500,000 people marched in Berlin alone and tens of thousands in other cities as well. This greatly outnumbered the security forces and finally led to the end of the GDR and a reunification of Germany.

Every family in Germany was also greatly affected by the Second World War. My grandfather was in a concentration camp. As a teenager, my father was the runner who supplied his mother and other families with water and food while they hid in cellars for weeks on end to evade the bombs of the Allies.

In school, I received many years of education on World War II as a measure to ensure that terrorism, war, and antisemitism would never occur again. I was 7 or 8 years old when I first saw a concentration camp, and my school visited the concentration camps every year thereafter to remind us about the cruelty of that time. This taught me how important it is to speak up, which didn’t happen enough during the reign of Adolf Hitler, often because people feared risking their lives.

Learning from the White Rose Movement

But there were some heroes during the rise of Hitler’s Third Reich, such as the White Rose movement in southern Germany that was active from 1942-43. This movement consisted of about 30 students at theUniversity in Munich, out of a class of 8,000! Sophie and Hans Scholl were siblings and headed the movement. They wrote thousands of pamphlets against the Nazi regime that publicly denounced the murder of the Jews. They asked the youth to unite in opposition against Hitler.

Unfortunately, Sophie and Hans were caught by the Nazis while distributing pamphlets and were executed by guillotine a few days later. They were only 22 and 24 years old. Their White Rose movement was an excellent and rare example of civil resistance against the Nazis.

What is the message of White Rose for all of us now?  That there must always be people who feel responsible for the freedom of others. If these young people were alive today, they would tell us “Don’t look away when African Americans are attacked or killed! Stand up against right-wing extremism!” We must develop the courage to stand up for our beliefs, civil rights, and ethical standards.

Don’t Be the Last One Standing

Martin Niemöller was a prominent Lutheran pastor who emerged as an outspoken opponent of Hitler. He spent the last seven years of the Nazi Regime in a concentration camp and is best remembered for his postwar words:

First they came for the socialists, and I did not speak out—because I was not a socialist.

Then they came for the Jews, and I did not speak out—because I was not a Jew.

Then they came for me—and there was no one left to speak for me.

We should never let it get this far.

In recent years in the US, freedom of the press seems to be increasingly challenged. In June 2020, during the first days of protests over the killing of George Floyd, advocacy NGOs reported over 100 attacks against journalists. At least 19 reporters were arrested, 36 journalists claimed they were shot by police with rubber bullets, and 76 reported assaults, 80% of them by police officers.

Please, let’s not be silent in times of crime, injustice, or cruelty of any kind. Let’s speak up and take action now!