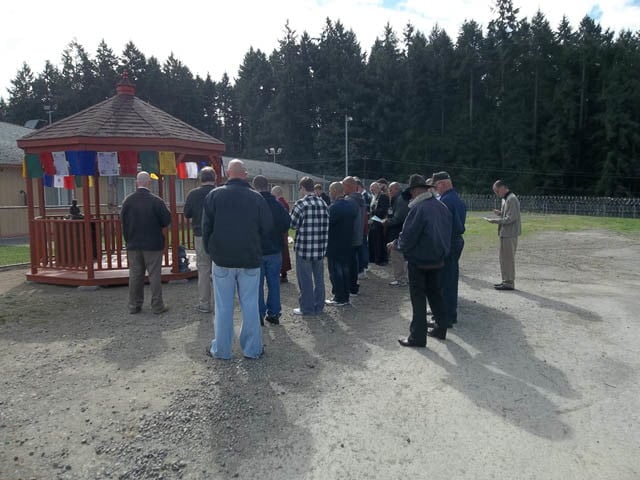 Despite prison bureaucracy and all the other obstacles that can arise, the Buddhist group at McNeill Island Special Commitment Center successfully petitioned for, acquired, and constructed a “pagoda”—a six-sided, half-walled gazebo—as a sacred space in the prison yard for meditation and other spiritual activities.

Ven. Chonyi joined guests from the Zen tradition, prison officials, and Buddhist residents to help them celebrate in a daylong “Buddhist Banquet and Pagoda Dedication.”

Metta—loving-kindness—was the theme for the day, and several men shared their experiences in developing it. They especially noted the care of one particular Buddhist inmate, whose compassion inspired them to try his methods for themselves.

One man described his journey to overcome hatred and concluded, “This Buddhist stuff really works!” For Ven. Chonyi, their stories illustrate the transformative power of one person’s kindness. She talks about the pagoda dedication day on Bodhisattva’s Breakfast Corner here.