Tea with a Buddha 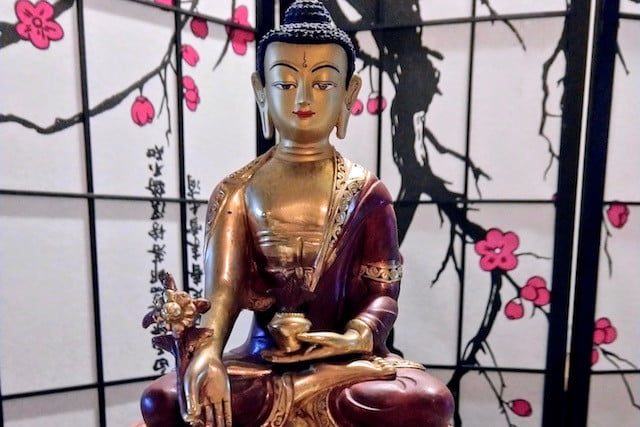 Christine Racine has been enrolled in the Sravasti Abbey Friends Education (SAFE) distance learning program for several years. She shared this experience in Course 9, which focuses on using a Buddha image as an object of meditative concentration.

A little under a year ago, I inadvertently developed a new method for familiarizing myself and connecting with various Buddhas. It is a great help in preparing for visualization practice, as well as building my mindfulness and generosity. I host tea ceremonies for statues or other images of the holy beings I want to deepen my connection with. 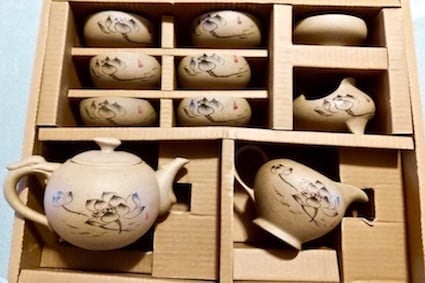 It started last summer after I picked up a gong fu tea set in Chinatown on a rare daytrip to Boston. The impulse to buy the set was mostly worldly; the roundness and proportions of the tea ware, the texture, and, of course, the lotuses painted on each piece appealed to my aesthetic attachment. I was also interested because I did have a sense that there was at least some chance of cultivating mindfulness in learning the intricacies of ceremonial tea service.

Being a little down on myself one Sunday morning not long after buying the tea set, I wanted to practice using it but didn’t feel right about going to all that trouble for myself alone. My mother was too soundly asleep for me to even think of trying to get her up and the cat had zero interest in joining me.

Then I remembered that one of my teachers had a daily “morning tea with Tara,” where he poured two cups and visualized Green Tara sitting with him and having a conversation. Not trusting my powers of visualization and concentration that much, I respectfully invited one of my statues, reverently carrying it from my shrine to a place of honor I had set up on the kitchen table.

We had a lovely ceremony. When I wasn’t focused on brewing, pouring, presenting, and tasting the tea, I gazed lovingly at the representation before me, studying the finer details and really letting the sense of connection sink into my heart.

Later that week, I realized that not only had sharing that special time with one of the Buddhas soothed my heart in the moment, but I was also having an easier time concentrating on the visualized image.

Most weekends since, I have invited a Buddha or bodhisattva to tea at least one morning. Sometimes I pick what variety of tea to make based on what best seems to fit my guest of honor. Sometimes I start by asking myself which holy being would most appreciate the particular tea I want to make. I have added to the offering aspect over time—not only serving tea but taking time to consider and arrange flowers or foliage, a decorative source of light, and the best of whatever fruit we have on hand.

Though my concentration is far from single-pointed, these ceremonies have notably helped improve it.