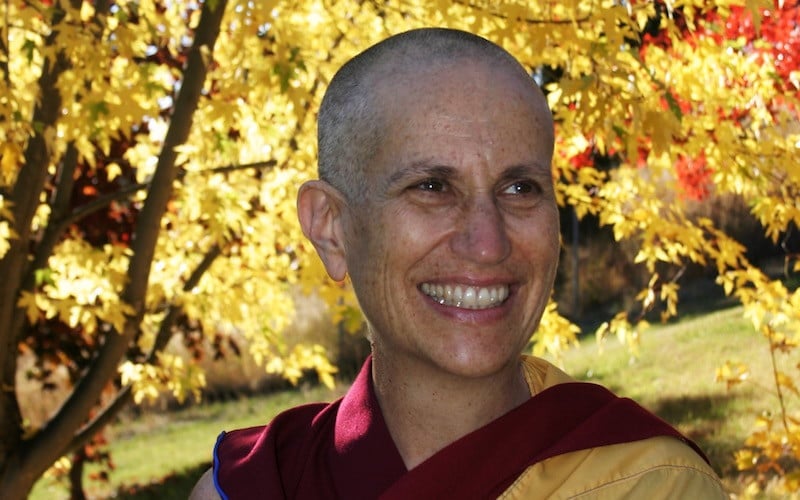 Venerable Thubten Chodron—Sravasti Abbey founder and abbess—has received the Global Bhikkhuni Award presented by the Chinese Buddhist Bhikkhuni* Association of Taiwan.  Nuns from 12 countries have received the award. Venerable Chodron joins Buddhist author and teacher Venerable Pema Chodron as the only two nuns from the Tibetan tradition to be honored this year. In addition, four Theravada nuns and two from the Chinese Mahayana are among the eight honored nuns based in North America.

In selecting Thubten Chodron, the Association writes, “Venerable Bhikkhuni Thubten Chodron, you are being honored for preserving, protecting, and promoting Tibetan Buddhism by establishing and being the Abbess of Sravasti Abbey in Washington, USA and for offering teachings, both oral and written, which reach the hearts and are widely received by the American people.”

Venerable Chodron founded Sravasti Abbey in 2003 as the first Tibetan Buddhist training monastery for Westerners in the U.S. She has published 26 books on Buddhist philosophy and meditation, and has co-authored a book—Buddhism: One Teacher, Many Traditions—with His Holiness the Dalai Lama, with whom she has studied for nearly forty years.

The Chinese Buddhist Bhikkhuni Association of Taiwan is a 300-member organization of accomplished Buddhist nuns. Made up of teachers and abbesses of Taiwan’s numerous monasteries, the association has been recognized by the Taiwanese government for excellence in service to society.

The Association instituted the awards in honor of their 20th anniversary and will subsequently make presentations every three years. Chairperson Bhikkhuni Pu Huei explains, “We acknowledge that Buddhism is international and expanding, and women are at the forefront of that development. We understand that there are Bhikkhunis around the world who are working diligently in leading people to practice the Buddha Dhamma (Buddhist teachings), and this we want to recognize and celebrate!”

Ven. Chodron will travel to Taiwan receive the award, which will be presented during the 6-day Global Buddhist Awards Ceremony in Kaohsiung City, November 17 to 23.

*Bhikkhuni is the Pali word for “fully ordained nun.” We use the Sanskrit spelling, “bhikshuni,” at the Abbey and throughout this website.