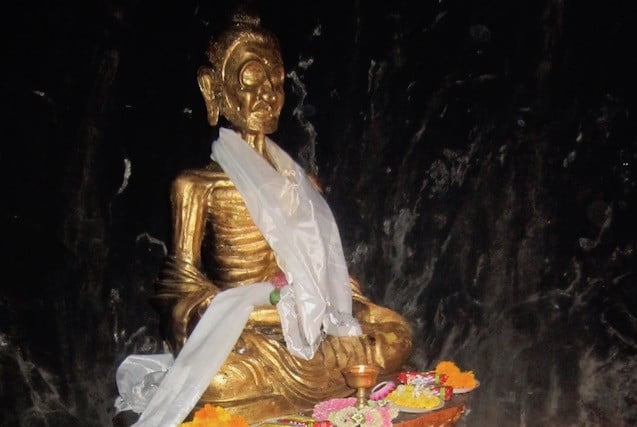 With gratitude to the Buddha for teaching the four noble truths, Venerable Damcho shares her journey with true sufferings and her awakening to a broader view.

Before I met the Dharma, literature and theatre were my refuge. It was the main reason why I went to school, and for many years that’s what I spent a lot of time studying, practicing, discussing, and eventually teaching for a short time.

When Geshe Yeshe Thabkhe taught the four noble truths during his course on Pramanavarttika, I found my mind wandering back to poems that I had studied many years ago, which was curious. After some reflection, I think it’s because poetry was what gave me my first glimpse into the first noble truth, the truth of duhkha or unsatisfactoriness. More specifically, poetry gave me a sense of the duhkha of duhkha, or gross mental and physical suffering, and how that applies to every sentient being.

I’d like to share with you one of the poems I studied in 9th grade, which was written in 1918 during the First World War, and served as a door to the duhkha of duhkha for me. But first, I have to give you a “trigger warning.” Earlier this year I communicated with an old friend who teaches playwriting at college. He told me there’s been a movement to put “trigger warnings” on college readings, to alert students that a work contains violent or potentially distressing material. He was honestly quite frustrated because you basically have to put a trigger warning on every classic play starting with the Greeks.

Bent double, like old beggars under sacks,
Knock-kneed, coughing like hags, we cursed through sludge,
Till on the haunting flares we turned our backs,
And towards our distant rest began to trudge.
Men marched asleep. Many had lost their boots,
But limped on, blood-shod. All went lame; all blind;
Drunk with fatigue; deaf even to the hoots
Of gas-shells dropping softly behind.

Gas! GAS! Quick, boys!—An ecstasy of fumbling
Fitting the clumsy helmets just in time,
But someone still was yelling out and stumbling
And flound’ring like a man in fire or lime.—
Dim through the misty panes and thick green light,
As under a green sea, I saw him drowning.

In all my dreams before my helpless sight,
He plunges at me, guttering, choking, drowning.

If in some smothering dreams, you too could pace
Behind the wagon that we flung him in,
And watch the white eyes writhing in his face,
His hanging face, like a devil’s sick of sin;
If you could hear, at every jolt, the blood
Come gargling from the froth-corrupted lungs,
Obscene as cancer, bitter as the cud
Of vile, incurable sores on innocent tongues,—

My friend, you would not tell with such high zest
To children ardent for some desperate glory,
The old Lie: Dulce et decorum est
Pro patria mori

The closing lines in Latin are a quote from a poem by the Roman poet Horace and they mean, “It is sweet and fitting to die for one’s country.”

You have to wonder

There we were, 14 years old, sheltered Singaporean schoolchildren, bearing witness to what had happened to millions of teenage boys just a few years older than us in a terrible war. Sitting there I wondered, what now? Do we cry? Scream? Observe a minute of silence?

None of the above.

And you have to wonder, after a poem like this is published, how can people still send children into war? But it’s happened. After the First World War there was a Second. And on, and on, and on, to this very day. As another of my favorite poets, W. H. Auden wrote, “poetry makes nothing happen: it survives.”

For years I was obsessed with literature written after the First and Second World War. I think I was searching to see if there might be answers about why we make each other suffer, and how to prevent suffering. But I didn’t really find one. Bertolt Brecht wrote in exile,

I would say that’s where literature stopped for me. It gave me a glimpse of the first noble truth and I got stuck there. By the time I was in my twenties I presented as positive and optimistic, but inside I had a lot of rage, cynicism, and despair. I remember looking at photos of the G8 Conference with my friends many years ago and saying, “Someone should set off a bomb there.” I wanted the privileged to be punished. That’s a scary place to be mentally.

Not the whole story

What I find so precious about the Dharma is that the Buddha didn’t stop at the first noble truth. He taught the second, third, and fourth as well. Yes, there is duhkha. And it has causes, these causes can be ceased, and there is a path to that cessation. I have found this teaching to be so incredibly helpful and hopeful.

I want to share with you a passage by Venerable Bhikkhu Bodhi on the four noble truths that really resonated with me from a text that is part of our Sravasti Abbey Friends Education program:

“The teaching given by the Buddha in the first noble truth often tends to arouse a certain degree of emotional resistance. This gives rise to misunderstanding, sometimes to false charges of, ‘Buddha’s a pessimist, a negativist, one who sees only the dark side of things.’ However we have to understand the Buddha’s purpose in teaching the first noble truth. The Buddha’s aim in this whole Dhamma is to lead us to liberation, to lead us out of an unsatisfactory situation. And the way to liberation lies through correct knowledge, through seeing and understanding our existence as it is. In coming to the Dhamma, we have to come with an open mind ready to look at things objectively, to see them as they are—knowing and seeing things as they are.”

Venerable Bhikkhu Bodhi goes on to say how this takes internal effort, because we don’t want to look at duhkha. He writes,

“On the larger scale we put the old people off into homes for the aged—we don’t want to see old age. The sick people are put off into hospitals, and if we have to go to the hospital we go reluctantly. The dead are embalmed and covered over with nice flowers, put into very nice tombs. Poverty and war we shut off into little corners of our mind. We sit comfortably, looking at nice pleasant cozy comfortable things. We’re driven basically by an innate desire for pleasure.”

Reflecting on what Venerable Bhikkhu Bodhi wrote, perhaps literature—especially the literature of witness—can be a beginning. It can draw our attention to duhkha, put the spotlight on what society doesn’t want to look at, and speak and remember what is unspeakable. To quote Auden again, poetry is a “a way of happening, a mouth.” Or as one of my playwriting professors, Erik Ehn, who wrote extensively on genocide and war said, “The space between speech and silence is song.”

I am deeply grateful to the Buddha, for not only singing about the dark times, but also about their causes, their cessation, and the path to that cessation for ourselves and for all sentient beings.