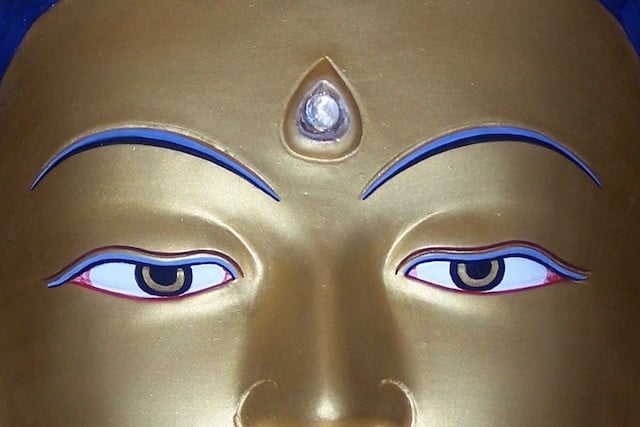 “The essence of the Buddha’s teachings is expressed in the Four Noble Truths. By understanding them, we’ll enter the path to liberation and enlightenment.”

On Sunday, August 4, Tibetan Buddhists celebrate the first “turning of the Wheel of Dharma,” the occasion when the newly awakened Buddha gave his first teaching and brought the Dharma into this fortunate age.

If you live near the Abbey, you can celebrate with us at Sharing the Dharma Day.

After the Buddha attained enlightenment under the Bodhi tree, he pondered that his realizations—his Dharma—was profound and not easy to understand. He wondered  if sentient beings were actually ready for his teachings. It is told that the god Brahma requested the Buddha to teach, saying there were beings “with little dust in their eyes” who could understand and benefit from the Buddha’s teachings.

Responding to Brahma’s request, the Buddha thought about the five ascetics who had been his companions when he was immersed in ascetic practices. The Buddha thought they had the potential to understand what he himself had understood during his awakening.

The Buddha found his old companions in Sarnath. There he gave them the first teaching; the first turning of the Wheel of Dharma. He spoke of the Four Truths of the Aryas: True Dukkha, True Origins, True Cessations and True Paths. This first teaching constitutes the overarching structure within which all Buddha’s teachings can be categorized.

Wheel Turning Day is a very auspicious occasion to engage in virtuous action.

The merit of every virtuous action done on this day is multiplied 100 million times.

Celebrate by engaging in special practices. Here are some suggestions: