Yeshe and the Abbey Garden 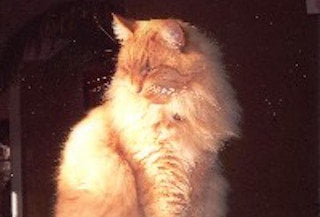 In the last article in this series of metta in the garden, I shared my process of using the dharma to transform my indifference at times to the multitude of sentient beings affected by my gardening at the Abbey. In the past few months I have made some small strides to increase my awareness of their presence and to see them as having been my mothers countless lifetimes. The 1st precept has taken on a deeper significance this past year in regards to my cat Yeshe.

Yeshe had been a 3 month old orphan when my Seattle neighbors brought him home to meet me 3 1/2 years ago. He was a beautiful long haired orange cat that just warmed my heart. He was affectionate, precocious, corny, and stubborn and charmed everyone who met him. He was a character for sure. He was also a hunter to his core and honed his skills quickly. By his first year he was bringing home a bird at least twice a week.

City wildlife can be pretty smart about cats although Yeshe would soon discover the nests in the neighbor’s shrubs. It was heart breaking to find tiny new born birds in the house barely alive with Yeshe watching and playing with them. I would scold him and tell him about not killing and the negative karma he was creating as often as I found any animal in the house or yard. Hopefully the imprints would be in his mind for future lives.

When I moved Venerable kindly allowed me to bring Yeshe provided he lived with me in the little cabin at the end of the garden and that I took responsibility for his care and well being. I was happy to be able to have him with me, and was anticipating a smooth transition with some vigilance on his whereabouts in regards to the coyotes that ran in the forests of the Abbey.

Yeshe loved the Abbey. After the first few tentative days where he stayed very near the cabin we lived in, his curiosity overcame the fear of a new place. He had 2 acres of beautiful garden with big trees and a big barn to explore. Unfortunately I soon realized that I had brought Yeshe to what would be called a pure land in the cat world. Wildlife was in abundance in the Abbey garden with over a dozen species of birds including hummingbirds as well as chipmunks, mice, rats, squirrels, snakes, frogs, butterflies and moths. His whole day revolved around spying, stalking, pouncing, killing and eating an assortment of animals.

He was honing his hunting skills quickly and soon I was finding daily evidence that the numbers of fatalities was increasing. I was rescuing at least one little critter every day or so. And I had no idea how many I did not find, since a few months after we moved to the Abbey, the 5 foot fence became too confining for him and he would disappear for hours into the tall grasses in the meadows surrounding the garden. I was not only worried about the growing numbers of creatures he was hunting but also knowing that he could become the hunted outside the safety of the garden fence.

For seven months I had to have eyes in the back of my head always calling, hearing his bell (which never was big enough to alert his prey), and spending quite a bit of my day just trying to keep him busy with me as I worked around the Abbey garden and buildings. As December and the 3 month silent retreat drew near, I knew that trying to keep an eye on him and focusing on 6 sessions of meditation a day would not work. So Renee, my friend and former house mate who knew and loved Yeshe agreed to keep him in Seattle while I was on retreat. He would be in his old house and in his old neighborhood, where everyone loved him and kept an eye on him.

Somewhere towards the end of the retreat in March I came to the difficult understanding that if I was going to practice the dharma and adhere to one of the Abbey’s main objectives to protect wildlife, I would have to give Yeshe up. I loved the wildlife of the Abbey very much too, and it was not fair or kind of me to endanger their lives because of my love and attachment to one little cat.

Despite the wonderful karma Yeshe had with the Abbey and Venerable, it could not counteract the vast amount of negative karma he was creating by his killing sprees. In his lifetime if he lived to be 10 years old even, he would have killed hundreds of sentient beings which would have assured him lifetimes perhaps in the lower realms. It was one of the hardest decisions I have ever made. My karma with Yeshe was very strong, and I felt I had some responsibility to help him in a beneficial way. I had also tried to create a garden at the Abbey that would be home to a growing number of little beings, and I was setting them up to be endangered.

Venerable agreed that karmically it was a good decision for Yeshe. Renee kindly agreed to keep Yeshe as long as she could. She loved and cared for him very much and since he was in a dharma household he would continue to hear mantra and be with holy objects. Renee would continue to teach him about not killing if he should bring home any animals. She would try and keep an eye on him as would the neighbors on the block and when he was with people he tended to behave himself more. Venerable left the possibility of him returning one day if Renee became unable to care for him.

I missed his company a lot the first few weeks. He had been a wonderful companion and had made me laugh a lot with his corny pranks. And he was an affectionate little guy. But as spring arrived so did the birds and the chipmunks, mice, squirrels and frogs. I had decided to renovate the garden and had replanted it with help from Venerable, Jan, and Deb a landscaper friend from Issaquah.

We planted it with a lot of bulbs, perennials and flowering shrubs, placed birdbaths and prayers flags with bright colors. I began to realize how much Yeshe’s presence in the garden had kept all these beautiful little beings away. It was becoming a sanctuary for a number of ground feeding birds and a funny little marmot we called Marilyn. The birdhouses were all full with new babies and the squirrels were chasing each other all over the yard. It had been a wise decision.

So as I write this article I am aware of all the people who may be reading this who have cats, and love them as much as I love Yeshe. It is a hard decision to keep your feline friend indoors, but you need to try if at all possible. Yeshe being born outside loved the outdoors and my feeble attempts to make him an indoor cat failed miserably because of his persistence and my indifference. If you do have a cat and do let them outdoors, please take the responsibility of keeping an eye on them and have them outside when you can be with them.

If you have a garden to attract wildlife and have a cat, think twice about the situation you are creating karmically for everyone involved. They may be cats and cats hunt but we can help lessen their impact on the sentient beings we also have karma with – the birds, mice, rats, snakes, butterflies, insects and such in our yards. Our wonderful feline friends propelled by their hunting and craving minds will continue rebirths in the lower realms if we don’t take responsibility for providing them an environment that minimizes the negative karma they may create. And we won’t be karma free either. By saying mantra and prayers for the dead animals your cat kills and teaching your cat over and over again about not killing, we can be of benefit to ourselves, the hunter and the hunted.

Yeshe was killed in Seattle 2 months ago while chasing a rat across a street a few blocks from his new home with Renee. May his short life and death help him to purify whatever negative karma he created by his hunting. May the joy and laughter he brought to people ripen in countless virtuous ways. May he and all the little sentient beings he killed be reborn with precious human lives, meet the dharma once again and have a deep connection to the Abbey and to Venerable Chodron and other qualified Mahayana teachers.